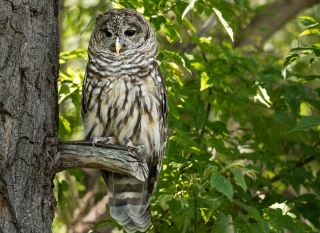 If asked, spotted owls would likely vote against marijuana legalization.

New research reveals that several species, including the northern spotted owl, are succumbing to rat poison from thousands of "unpermitted private marijuana grow sites" in the northwestern California counties of Humboldt, Mendocino and Del Norte.

It's the contamination of the owls' primary food source — mice and rats, which, like humans, are attracted to the aromatic crop — that has been the animals' undoing: Scientists from the University of California, Davis, and the California Academy of Sciences have detected traces of anticoagulant rodenticide in seven of the 10 northern spotted owl carcasses they collected, according to a study published today (Jan. 11) in the journal Avian Conservation and Ecology.

The species, which is listed as threatened under federal and state endangered species acts, isn't the toxicant's sole victim, either. Barred owls, which compete for the same space and resources as their spotted kin, are also being exposed to the same poison from their communal prey. [Photos: Salmon-Eating Owls Revealed in Stunning Images]

Of the 84 dead barred owls the researchers collected, 34 — about 40 percent — tested positive for the substance, which impedes the body's ability to clot blood and can result in unchecked internal bleeding.

"Spotted owls are inclined to feed along forest edges. Because grow sites break apart these forest landscapes, they are likely source points for exposure," lead study author Mourad Gabriel, of UC Davis, said in a statement.

With the rollout of Proposition 64, the 2016 voter initiative to legalize cannabis in the Golden State, resource managers say they expect to see an uptick in the number and size of these informal cultivation sites.

This trend, the researchers said, could "exacerbate the problem." Even with a legal weed marketplace, most black-market growers remain entrenched in the shadows.

Only a handful of the 4,500 to 15,000 private cultivation sites in Humboldt County alone, for instance, operate with any kind of regulatory oversight, Gabriel said.

"When you have thousands of unpermitted grows and only a handful of biologists that regulate that for multiple counties, we're deeply concerned that there aren't sufficient conservation protective measures in place," Gabriel said in the statement. "If no one is investigating the level at which private marijuana cultivators are placing chemicals out there, the fragmented forest landscapes created by these sites can serve as source points of exposure for owls and other wildlife."

The results of the study support further investigation into the fragile interrelationships that hold the natural world together.

"Access to these owl specimens allows us to explore the health of the entire regional forest system," said Jack Dumbacher, curator of ornithology and mammalogy at the California Academy of Sciences, where the necropsies were conducted. "We're using our collections to build a concrete scientific case for increased forest monitoring and species protection before it's too late to intervene."