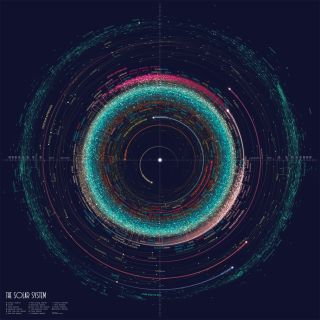 This map of the solar system shows the precise orbital patterns of 18,000 celestial objects, thanks to data from NASA and other public archives.
(Image: © Eleanor Lutz/TabletopWhale.com)

In most maps of the solar system, you can expect to see the eight canonical planets (plus whatever Pluto is at the moment) trailing the fiery orange sun like polite little ducklings in a row. In biologist Eleanor Lutz's new map of the solar system, which shows the precise orbital paths of more than 18,000 near celestial objects, you'll be lucky if you can even find Mars.

Lutz is a doctoral candidate at the University of Washington who spends her evenings turning public data sets into hyperdetailed works of art. In her new project, called the Atlas of Space, she's borrowed more than a decade of data compiled by the likes of NASA, the U.S. Geological Survey and other science organizations to create some of the most accurate maps of the solar system that will fit on your bedroom wall. [10 Interesting Places in the Solar System We'd Like to Visit]

The map shown here, which Lutz posted to her website on June 10, was created from orbital data taken from a dozen different public databases. Going above and beyond most textbook space maps, this guide to the cosmos shows the asteroid belt between Mars and Jupiter and the Kuiper Belt beyond Neptune in gorgeous, chaotic detail.

"This map shows each asteroid at its exact position on New Years' Eve 1999," Lutz wrote on her site. "This includes everything we know of that's over 6.2 miles (10 kilometers) in diameter — about 10,000 asteroids — as well as 8,000 randomized objects of unknown size."

This is our solar system in macro. Over the coming weeks, Lutz also plans to share some more intimate views of Earth's nearest cosmic neighbors, including topographic maps of Mercury and Venus. While these lovely maps may not take you to another world, they'll probably blow your mind a little bit.

Want a taste? Take a look at the Kuiper Belt (the outermost ring of green asteroids) on the bottom of the map.

"You might notice that Pluto is shown inside Neptune's orbit," Lutz wrote. "It turns out that about 10% of the time, Pluto is actually closer to the sun than Neptune."

Editor's Note: A caption in the second image of this story was updated. Mercury is not the hottest planet, though it is quite hot.