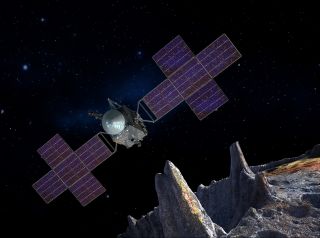 The naked metallic core of a dead, early planet should soon get a visitor. Orbiting the sun between Mars and Jupiter, the bizarre space rock is the target of a NASA mission that just entered its final design phase this week.

The space agency has targeted the date of Jan. 31, 2026, for the arrival of a spacecraft in the neighborhood of Psyche, a 125-mile-wide (200 kilometers) object in the asteroid belt. Planetary scientists have long suspected that Psyche — named after the nymph who married Cupid in Greek mythology — made up almost entirely of iron and nickel, might be the exposed core of a long-dead protoplanet from the early days of our solar system. The planet could have once boasted a girth similar to that of Mars before ancient collisions ripped its outer, rocky shell from its relatively dinky core.

Workers on the Psyche mission hope that their probe might provide more conclusive evidence for that theory and reveal new information about the swirling cloud of matter from which our ancient neighborhood first formed. [Black Marble Images: Earth at Night]

"With the transition into this new mission phase, we are one big step closer to uncovering the secrets of Psyche, a giant mysterious metallic asteroid, and that means the world to us," Lindy Elkins-Tanton, an Arizona State University planetary scientist and principal investigator on the Psyche mission, said in a statement. [Doomsday: 9 Real Ways Earth Could End]

Psyche has a mass of about 49 billion billion lbs. (22 billion billion kilograms), making it 0.03% the mass of our moon. While it's the eleventh most massive known asteroid in the solar system — a few hundredths of the mass of monsters like Ceres and Vesta — those even-larger asteroids are made up primarily of rock and ice. Psyche is by far the largest known object of its nearly-pure metallic type orbiting our sun.

The Psyche probe should orbit the metal object for a couple weeks, collecting data about its age and how it formed. During this final design phase, engineers will draw up final plans for and build many of the parts that will make up the final spacecraft. (They won't be assembled into one piece until the next phase, in 2021.)

If everything goes according to plan, the mission should launch in August 2022, swing by Mars in 2023 and approach Psyche three years later.