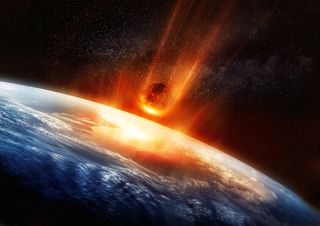 What would happen if a giant asteroid slammed into Earth? The European Space Agency (ESA) anticipates a coming crash would send alarmed humans to social media.

To be prepared, the agency is launching its first-ever live social media dry run this coming week, highlighting the actions that scientists, space agencies and civil protection agencies might take in the event of a pending and major international asteroid impact.

This isn't the first such drill, however. Every two years, asteroid scientists join forces to simulate what they would do if an asteroid collided with the planet. Each participant is assigned a part, such as "national government," "space agency," "astronomer" and "civil protection officer,” the ESA reported in a statement.

It's always a mystery how the fake catastrophe will play out. To find out, the public is invited to watch updates from the drill live on the @esaoperations Twitter channel, which will run from this coming Monday to Friday (April 29 to May 3). [Doomsday: 9 Real Ways Earth Could End]

"The first step in protecting our planet is knowing what's out there," Rüdiger Jehn, ESA's head of Planetary Defence, said in the statement. "Only then, with enough warning, can we take the steps needed to prevent an asteroid strike altogether, or to minimize the damage it does on the ground."

It's not entirely out of this world that an asteroid might strike Earth. As of April 2019, scientists have catalogued about 20,000 asteroids that have an orbit close to our planet. Given that about 150 of these near-Earth asteroids are discovered every month, this number will only increase.

The ESA noted that new technologies are helping space agencies learn about asteroids. For example, the ESA's new Flyeye and Test-Bed Telescopes, which are set to be deployed soon, will help the ESA find, confirm and understand these ancient space rocks, the agency said.

In the meantime, you can join the ESA on Facebook for two livestream videos from the Planetary Defense Conference. The first will begin at 8 a.m. EDT (14:00 Central European Summer Time) on Sunday (April 28) with Jehn, and the second will begin the morning (midafternoon European time) on Thursday (May 2).