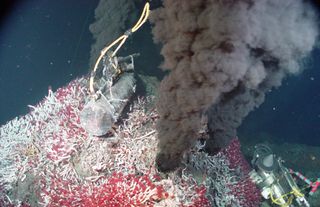 Every year, billions of gallons of ocean water fall into the Earth at tectonic plate boundaries, then gush back out at hydrothermal vents like the one seen here. A new study shows that this deep water cycle may contribute to hundreds of feet of sea level loss over time.
(Image: © NOAA)

The ocean is a big bathtub full of 326 million cubic miles (1.3 billion cubic kilometers) of water, and somebody has unplugged the drain.

Every day, hundreds of millions of gallons of water stream from the bottom of the ocean into Earth's mantle as part of a very wet recycling program that scientists call the deep water cycle. It works like this: First, water soaked up in the crust and minerals at the bottom of the sea both get shoved into Earth's interior at the undersea boundaries where tectonic plates collide. Some of that water stays trapped (some studies estimate that two to four oceans’ worth of water are sloshing through the mantle), but large amounts of that water get spewed back to the surface via underwater volcanoes and hydrothermal vents. [50 Interesting Facts About Planet Earth]

It's not a perfect system; scientists think there's currently a lot more water plunging into the mantle than spewing out of it — but that's OK. Overall, this cycle is just one cog in the machine that determines whether the world's oceans rise or fall.

Now, in a study published May 17 in the journal Geochemistry, Geophysics and Geosystems, researchers report that this cog may be more improtant than previously thought. By modeling the fluxes in the deep water cycle over the last 230 million years, the study authors found that there were times in Earth's history when the gargantuan amount of water sinking into the mantle played an outsize role in sea level; during those times, the deep water cycle alone may have contributed to 430 feet (130 meters) of sea-level loss, thanks to one world-changing event: the breakup of the supercontinent Pangaea.

"The breakup of Pangaea was associated with a time of very rapid tectonic plate subduction," lead study author Krister Karlsen, a researcher at the Centre for Earth Evolution and Dynamics at the University of Oslo, told Live Science. "This led to a period of large water transport into the Earth, causing associated sea-level drop."

Death of a supercontinent

About 200 million years ago, the supercontinent Pangaea (a landmass consisting of all seven continents we know today) started to split, sending massive slabs of land careening in all directions.

As these continental plates spread apart, new oceans appeared (beginning with the Atlantic, roughly 175 million years ago), huge rifts in the seabed cracked open and ancient slabs of underwater crust plunged into the fresh voids. Gargantuan amounts of water that were trapped inside those sinking chunks of crust moved from the planet's surface into its deep interior.

Building on previous studies of Earth's tectonic plates over the last 230 million years, the researchers modeled the approximate rates that water entered — and left — Earth's mantle. The faster a water-rich plate fell into Earth, the farther it could subduct before its water content was evaporated by the high heat of the mantle. According to the team's calculations, this imbalanced the deep water cycle enough to result in millions of years of extreme water loss.

Of course, there is more to sea level than just the movement of very deep water, Karlsen said, and this study doesn't account for other sea level changing processes like climate change or ice sheet coverage. Even as massive amounts of water sink into the mantle, actual sea levels can spike and plummet by hundreds of feet on much shorter timescales.

Right now, the ocean is in the midst of another sea level spike, thanks largely to manmade climate change (estimates vary, but sea levels will probably rise anywhere from 6 to 16 feet over the next century). Sadly, all those billions of gallons of sea water pouring into the mantle right now can't save us from this dangerous trend.