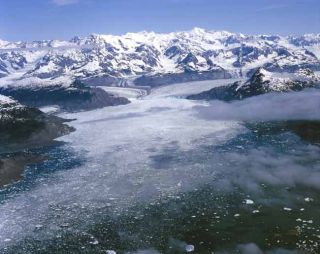 Acceleration and calving of the Columbia Glacier and other tidewater glaciers in the far north are a large reason glaciers and ice caps are contributing more to sea level rise this century than Greenland and Antarctica, says a new CU-Boulder study.
(Image: © Robert. S. Anderson, University of Colorado)

A recent high-profile study led by US climatologist James Hansen has warned that sea levels could rise by several meters by the end of this century. How realistic is this scenario?

We can certainly say that sea levels are rising at an accelerating rate, after several millennia of relative stability. The question is how far and how fast they will go, compared with Earth's previous history of major sea-level changes.

Seas have already risen by more than 20 cm since 1880, affecting coastal environments around the world. Since 1993, sea level has been rising faster still (see chapter 3 here), at about 3 mm per year (30 cm per century).

One key to understanding future sea levels is to look to the past. The prehistoric record clearly shows that sea level was higher in past warmer climates. The best evidence comes from the most recent interglacial period (129,000 to 116,000 years ago), when sea level was 5-10 m higher than today, and high-latitude temperatures were at least 2℃ warmer than at present.

The two largest contributions to the observed rise since 1900 are thermal expansion of the oceans, and the loss of ice from glaciers. Water stored on land (in lakes, reservoirs and aquifers) has also made a small contribution. Satellite observations and models suggest that the amount of sea-level rise due to the Greenland and Antarctic ice sheets has increased since the early 1990s.

Before then, their contributions are not well known but they are unlikely to have contributed more than 20 percent of the observed rise.

Together, these contributions provide a reasonable explanation of the observed 20th-century sea-level rise.

The Intergovernmental Panel on Climate Change (IPCC) projections (see chapter 13 here) forecast a sea-level rise of 52-98 cm by 2100 if greenhouse emissions continue to grow, or of 28-61 cm if emissions are strongly curbed.

The majority of this rise is likely to come from three sources: increased ocean expansion; glacier melt; and surface melting from the Greenland ice sheet. These factors will probably be offset to an extent by a small increase in snowfall over Antarctica.

With continued emissions growth, it is entirely possible that the overall rate of sea-level rise could reach 1 m per century by 2100 — a rate not seen since the last global ice-sheet melting event, roughly 10,000 years ago.

Beyond 2100, seas will continue to rise for many centuries, perhaps even millennia. With continued growth in emissions, the IPCC has projected a rise of as much as 7 m by 2500, but also warned that the available ice-sheet models may underestimate Antarctica's future contribution.

The joker in the pack is what could happen to the flow of ice from the Antarctic ice sheet directly into the ocean. The IPCC estimated that this could contribute about 20 cm of sea-level rise this century. But it also recognised the possibility of an additional rise of several tens of centimeters this century if the ice sheet became rapidly destabilised.

This could happen in West Antarctica and in parts of the East Antarctic ice sheets that are resting on ground below sea level, which gets deeper going inland from the coast. If relatively warm ocean water penetrates beneath the ice sheet and melts its base, this would cause the grounding line to move inland and ice to flow more rapidly into the ocean.

Several recently published studies have confirmed that parts of the West Antarctic ice sheet are already in potentially unstoppable retreat. But for these studies the additional rise above the IPCC projections of up to 98 cm by 2100 from marine ice sheet instability was more likely to be just one or two tenths of a meter by 2100, rather than several tenths of a meter allowed for in the IPCC report. This lower rise was a result of more rigorous ice-sheet modelling, compared with the results available at the time of the IPCC's assessment.

How stable are ice sheets?

Ocean temperatures were thought to be the major control in triggering increased flow of the Antarctic ice sheet into the ocean. Now a new study published in Nature by US researchers Robert DeConto and David Pollard has modelled what would happen if you factor in increased surface melting of ice shelves due to warming air temperatures, as well as the marine melting.

Such an ice-shelf collapse has already been seen. In 2002, the Larsen-B Ice Shelf on the Antarctic Peninsula disintegrated into thousands of icebergs in a matter of weeks, allowing glaciers to flow more rapidly into the ocean. The IPCC's predictions had considered such collapses unlikely to occur much before 2100, whereas the new study suggests that ice-sheet collapse could begin seriously affecting sea level as early as 2050.

With relatively high greenhouse emissions (a scenario referred to in the research literature as RCP8.5), the new study forecasts a rise of about 80 cm by 2100, although it also calculated that this eventuality could be almost totally averted with lower emissions. But when the model parameters were adjusted to simulate past climates, the Antarctic contribution was over 1 m by 2100 and as much as 15 m by 2500.

Greenland's ice sheet is crucially important too. Above a certain threshold, warming air temperatures would cause surface melting to outstrip snow accumulation, leading to the ice sheet's eventual collapse. That would add an extra 7 m to sea levels over a millennium or more.

Overall, then, it is clear that the seeds for a multi-meter sea-level rise could well be sown during this century. But in terms of the actual rises we will see in our lifetimes, the available literature suggests it will be much less than the 5 m by 2050 anticipated by Hansen and his colleagues.

The wider question is whether the ice-sheet disintegration modelled by DeConto and Pollard will indeed lead to rises of the order of 15 m over the coming four centuries, as their analysis and another recent paper suggest. Answering that question will require more studies, with a wider range of climate and ice-sheet models.

John will be on hand for an Author Q&A between 2 and 3pm AEDT on Thursday, March 31, 2016. Post your questions in the comments section below.