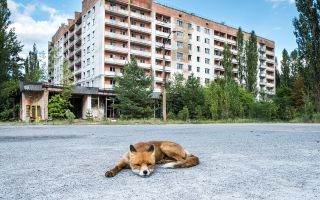 Chernobyl, site of the world's deadliest nuclear accident, is now a surprisingly popular tourist destination. But lethal radiation still permeates the landscape around the site, so why is it safe to visit at all?

Ukrainian officials opened the area to tourists nearly a decade ago, declaring that visits were safe, though tours would be strictly regulated. Since then, thousands of people have flocked to the Chernobyl exclusion zone. [5 Everyday Things That Are Radioactive]

It's true that radiation in large doses can cause tissue damage and acute sickness and increase the risk of cancer, according to the American Cancer Society.

However, people everywhere on Earth are bathed every day in radiation that's a natural part of the environment. This includes terrestrial radiation emanating from Earth itself, internal radiation generated by living organisms, and cosmic radiation from the sun and stars, according to the U.S. Nuclear Regulatory Commission (NRC).

On average, a person in the U.S. is exposed to about 3 millisieverts (mSv) of radiation per year, which is considered to be well within safe exposure levels. Radiation from medical imaging technology ranges from less than 1 mSv to about 20 mSv for certain computed tomography (CT) scans, the American College of Radiology reported.

Radiation doses of 50 to 200 mSv can lead to chromosomal damage, while doses of 200 to 1,000 mSv can cause a temporary drop in white blood cell count; serious radiation sickness sets in at about 2,000 mSv, and death follows within days of exposure to 10,000 mSv, according to the Atomic Archive.

Soon after the nuclear meltdown at Chernobyl, dozens of cleanup workers at the plant were exposed to radiation levels as high as 8,000 to 16,000 mSv, the equivalent of 80,000 to 160,000 chest X-rays. This led to at least 134 workers developing serious radiation sickness and caused 28 deaths.

When the Chernobyl reactor exploded, it released deadly levels of radiation, but radioactive fallout wasn't distributed evenly across the surrounding area, due to weather conditions and changing winds. Locations that were farther away from the reactor became radioactive hotspots, "and there were villages that were reasonably close to the plant that didn't get much contamination," said Fred Mettler, a professor emeritus and clinical professor with the Department of Radiology at the University of New Mexico School of Medicine.

Even within villages, radiation was unequally distributed and could vary from street to street, as Mettler learned when he visited the region from 1989 to 1990 with the U.N. Scientific Committee on the Effects of Atomic Radiation (UNSCEAR).

The ruins of the Chernobyl reactor, now contained under a metal shell, are still highly radioactive and will likely remain so for up to 20,000 years. However, the zones in Chernobyl that are now open to the public may have initially received lower doses of radiation, despite their proximity to the damaged reactor, Mettler told Live Science.

Background levels of radiation around Chernobyl overall were also lower than the global average before the accident, which may have helped to mitigate the radiation boost from the accident, Mettler added.

Nevertheless, ongoing radiation-safety concerns dictate that tourists are restricted to certain areas and are not permitted to wander on their own, tour leaders with Chernobyl Tour wrote on the Ukrainian company's website.

An average one-day visit to Chernobyl begins and ends with passage through an official checkpoint for dosimetry control, or radiation measurement, and there is an additional radiation checkpoint midway through the tour, according to the State Agency of Ukraine on Exclusion Zone Management.

Visitors may not touch any structures or plants or remove anything from the zone, and they are prohibited from sitting or placing any camera equipment on the ground, Chernobyl Tour representatives said.

An estimated 60,000 tourists visited Chernobyl in 2018, Anton Taranenko, the chief of the Tourism and Promotion Department of the Kiev City State Administration, recently said at a news briefing; of all the most popular tourist destinations in Ukraine, "Chernobyl zone is the leader," said Taranenko, according to the National News Agency of Ukraine.

Ukrainian tourism agency representatives claimed that bookings to Chernobyl rose by about 30% in May and will likely be even higher during the summer months due to the popularity of the recent HBO series "Chernobyl," Live Science previously reported.