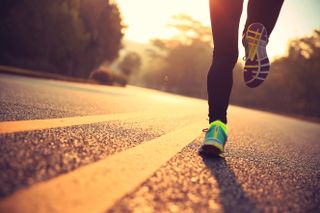 Endurance athletes are as superhuman as it gets, fueled by a seemingly inexhaustible supply of energy.

But a new study suggests that human endurance does have a limit — and it's likely similar for everyone. The long-term cap is about 2.5 times the body's resting metabolic rate, or 4,000 calories per day for an average person, scientists reported yesterday (June 5) in the journal Science Advances.

(The resting metabolic rate is a measure of how many calories the body burns for basic physiological needs such as maintaining body temperature and breathing.)

To see if there was a limit to endurance, researchers analyzed data from some of the most extreme endurance events on the planet. They measured the resting metabolic rate and the calories burned by people participating in The Race Across the USA, a series of back-to-back marathons that lasts months and takes runners from California to Washington, D.C. [5 Running Mistakes You Didn't Know You Make]

By analyzing urine samples from the runners in the first and last legs of the race, the researchers found that after five months of running, the athletes were burning far fewer calories than they did at the beginning of the race.

They also compared the results to already-published data from other activities such as marathons, swimming, Arctic trekking, the Tour de France, and earlier years of The Race Across the USA. The researchers found that, unsurprisingly, the longer the event, the harder it became to burn calories.

While participating in relatively short-term activities such as a single marathon run, the body can sustain burning calories at many more times the resting metabolic rate.

They even examined the endurance limit of pregnant women.

The researchers also found that pregnant women operated at around 2.2 times their resting metabolic rate, just by having a baby growing in their bellies. All of this is to say that no matter the activity — growing a baby, running across the U.S. or cycling — the body seems to have a limit to the amount of energy it can provide in the long term.

The reason for this hard limit could lie in the digestive system and in the amount of calories the gut can absorb a day, co-author Herman Pontzer, an associate professor of evolutionary anthropology at Duke University, said in a statement.

Athletes don't just break down when they reach this 2.5-times threshold. They can keep going but the person can't maintain a balance of the number of calories consumed and the amount burned. So the body begins to eat away at its own resources and the person begins to lose weight. That, in itself, isn't sustainable forever.

As far as they know, no one has maintained levels above the 2.5-times threshold, "so I guess it's a challenge to elite endurance athletes," Pontzer added. "Science works when you're proven wrong. Maybe someone will break through that ceiling some day and show us what we're missing."