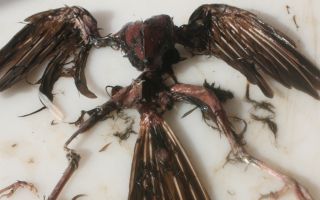 Birds that live on land were recently found for the first time in a very unexpected place: the stomachs of sharks.

In 2010, biologists surveying populations of tiger sharks (Galeocerdo cuvier) along the coasts of Mississippi and Alabama were surprised when one of their shark subjects regurgitated some unusual feathers that did not resemble those from a seabird.

Visual and DNA analyses revealed that the feathers were from a ground-dwelling brown thrasher (Toxostoma rufum), the scientists reported in a new study. Over the next eight years, the scientists examined the stomach contents of 105 tiger sharks. The researchers found that songbird-eating happened far more frequently than expected, identifying 41 sharks that had eaten terrestrial birds — 11 species in all, including barn swallows, wrens, sparrows and meadowlarks. [8 Weird Facts About Sharks]

Nearly half of those bird-eating sharks were youngsters, according to the study.

It's not unheard of for both juvenile and adult tiger sharks to eat seabirds such as gulls and pelicans, though those birds typically make up only a small percentage of the sharks' diets, lead study author J. Marcus Drymon, an assistant extension professor at Mississippi State University's Coastal Research and Extension Center, told Live Science in an email.

But how were the sharks catching songbirds, which live on land? The sharks' avian prey were likely blown out to sea by storms during seasonal migrations, the scientists wrote. Seabirds can easily alight on the ocean surface and take off again, but exhausted and soggy songbirds would flounder. That would make them easy targets for even very young sharks that weren't experienced hunters. [See Photos of Baby Sand Tiger Sharks]

Some of the songbird remains were easy to identify by sight, but in many cases, the scientists dredged up lone and bedraggled feathers from the tiger sharks' bellies. To identify those outliers, the researchers turned to a technique called DNA barcoding, which looks at a small section of the genome — much like a barcode — to identify a species, said study co-author Kevin Feldheim, manager of the Pritzker Laboratory for Molecular Systematics and Evolution at the Field Museum in Chicago.

To isolate the feathers' genetic material from the slurry of "fish goop" and other stomach contents, Feldheim sliced into the feather shaft and extracted DNA, he told Live Science. Some of the feathers were already too digested for scientists to identify them, but about half of them provided enough DNA to pinpoint the owners, Feldheim said.

When songbirds migrate, powerful storms that force the birds from the skies can kill thousands of the animals, according to the study. "These weather events, while lethal for the birds, provide unique scavenging opportunities for tiger sharks," the scientists reported.

The findings were published online today (May 21) in the journal Ecology.