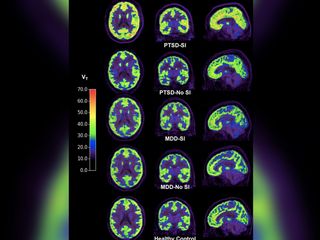 Researchers may have found a biomarker for suicidal thoughts in the brains of people with PTSD. Above, brain scan images show higher levels of the brain receptor mGluR5 in people with PTSD with suicidal ideation (SI), compared with other groups, including people with PTSD without SI; and people without PTSD. (Brighter colors on the scans indicate higher mGluR5 levels.)
(Image: © Image courtesy of Margaret T. Davis and Irina Esterlis.)

Researchers may have found a biomarker for suicidal thoughts in the brains of people with post-traumatic stress disorder (PTSD), a new study suggests.

The study found that people with PTSD had higher levels of a certain receptor on the surface of their brain cells, compared with people without PTSD. And among people with PTSD, those who reported experiencing some suicidal thoughts on the day of their brain scan had even higher levels of this receptor, compared with those that did not report suicidal thoughts on the day of the scan.

The findings, published May 13 in the journal Proceedings of the National Academy of Sciences (PNAS), are preliminary, and more research is needed to better understand the connection between this receptor, PTSD and suicidal thoughts. [5 Myths About Suicide, Debunked]

But the findings point to the receptor as a possible target for future drug therapies for PTSD, the authors said. Currently, there are only two drugs approved by the Food and Drug Administration for treating PTSD symptoms. But these drugs were initially developed for depression rather than PTSD; and they don't work for everyone and can take weeks or months to have any benefits.

"We don't have anything right now in PTSD [that] we can give people to alleviate suicidal thinking rapidly," said study senior author Irina Esterlis, a neuroscientist at Yale University School of Medicine. "If we have a biomarker that is specific to PTSD," that may pave the way for the development of a drug specifically for symptoms of suicidal thoughts tied to PTSD, Esterlis told Live Science.

People with PTSD are at increased risk for suicidal thoughts, suicide attempts and death by suicide. But there is limited understanding of the biololgical mechanisms that underly suicide risk in PTSD.

Previously, the same group of researchers found that people with PTSD had higher levels of a brain receptor called metabotropic glutamatergic receptor, or mGluR5, on the surface of brain cells, compared with healthy people who didn't have PTSD. Thisreceptor is for glutamate, a neurotransmitter, or chemical messenger, that's thought to play a role in numerous brain processes — ranging from learning and memory to sleep and cognitive functioning. However, whether this receptor is linked with suicidal thinking was previously unclear.

In the new study, the researchers scanned the brains of 29 people with PTSD, 29 people with depression who did not have PTSD, and 29 people (controls) who had not been diagnosed with any psychiatric disorder.

On the day of the scan, participants were asked whether they had experienced suicidal thoughts. Those who reported "active" suicidal thoughts, meaning they reported that they wanted to die and had a plan in place about how they were going to die, were excluded from the study and were taken to the emergency room get immediate help. But those who reported more passive sucidial thoughts, such as "I wouldn't mind if I were dead," or "I wish I were dead," but did not have a plan or intent for suicide were allowed to participate in the study, Esterlis said.

In addition, there was a link between mGluR5 availability and suicidal thoughts among people with PTSD, but not among those with depression.

The findings suggest that "mGluR5 may represent a promising treatment target for the reduction of suicidal ideation in PTSD specifically," the researchers wrote in the study.

The findings are "very exciting," said Christine DeLorenzo, an associate professor of psychiatry and biomedical engineering at Stony Brook University in New York, who was not involved with the study.

"The results suggest that mGluR5 could provide both a biomarker of risk [of suicide], but also a target for treatment interventions," DeLorenzo told Live Science. "Given the devastation of suicide and the growing numbers of those [dying by suicide] in certain populations, this is a critical problem to address."

What's more, the research is "another important step to revealing the biology of suicidality within PTSD, which will hopefully serve to reduce the stigma, and encourage those who are suffering to seek treatment," DeLorenzo said.

Although there are already drugs that target mGluR5 directly, Esterlis said that right now, those drugs should not be tested for treating PTSD symptoms in people. That's because studies in animals suggest that, in some cases, the drugs may make anxiety worse, she said. So the researchers want to come up with ways to indirectly target mGluR5, for example, by targeting certain hormones that may indirectly affect this receptor.

The researchers also plan to examine whether patients with certain "clusters" of PTSD symptoms (such as impulsivity or previous suicide attempts) might benefit most from such a treatment, she said.

The researchers noted that their study wasn't able to examine whether mGluR5 availability was tied to the severity of a person's suicidal thoughts, or whether the link between mGluR5 and suicidal thoughts changed over time.