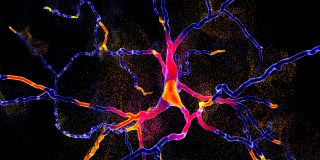 Clumps of proteins found in the brains of people who have Parkinson's disease are also found somewhere else in the body — inside the appendixes of healthy people.

But new findings suggest the opposite — removing the appendix is associated with an increased risk of developing Parkinson's. The study, which has yet to be published in a peer-reviewed journal, will be presented later this month at Digestive Disease Week, a scientific meeting focused on digestive diseases. [3 Myths About Parkinson's Disease]

The new study looked at data on more than 62 million patients, using a database of records from 26 major healthcare systems across the U.S. The researchers identified patients who had appendectomies — surgery to remove the appendix — and flagged those who went on to develop Parkinson's disease at least six months later.

The scientists found that, out of the more than 488,000 patients who had their appendixes removed, 4,470 (0.9%) of them went on to develop Parkinson's disease. Of the remaining 61.7 million patients who didn't have appendectomies, only around 177,000 (0.3%) later developed Parkinson's.

The findings suggest that the risk of developing Parkinson's disease is around three-fold higher for people who had appendectomies than those who did not, regardless of age, gender or race.

However, senior author Dr. Gregory Cooper, a professor of medicine at Case Western Reserve University in Cleveland, said, "at this point it's still an association," and not a cause-and-effect finding. In other words, the study does not prove that having the appendix removed causes Parkinson's.

One possible explanation for the increased risk found in the study is that, during an appendectomy a specific agent – called alpha-synuclein proteins – are released into the body and travel up to the brain, Cooper said. These proteins are known to form clumps called Lewy bodies — a tell-tale sign of Parkinson's disease.

Viviane Labrie, an assistant professor of neuroscience at Van Andel Research Institute in Michigan who was not a part of the new research, noted that the study "doesn't have a long follow-up window." That means that the researchers could only link appendectomies to the onset of Parkinson's movement problems, she said.

But these movement problems, or motor symptoms, don't truly represent the onset of the disease, Labrie told Live Science. Rather, Parkinson's disease has a roughly 20 year "prodromal period,"before these tell-tale symptoms appear. During this time, other less-obvious symptoms may occur.

For example, during the prodromal period, people with Parkinson's may experience symptoms such as constipation or other digestive issues, Labrie said. But, complicating matters further, those symptoms can increase the risk of appendicitis — the inflammatory condition that leads to an appendectomy. So, it's possible that the prodromal symptoms of Parkinson's disease may be causing the appendicitis and the subsequent surgery, and not the appendix removal causing Parkinson's disease, she said.

Labrie was the senior author of a study published in October 2018 in Science Translational Medicine, which used data from a Swedish database of more than 1.6 million people that tracked patients for up to 52 years. That report found that people who had their appendix removed when they were young were 19% to 25% less likely to develop Parkinson's later in life.

The "key difference between [the Swedish] study and the [new] US study is [the] length of time the patients were followed," Labrie said.

Cooper agreed that a limitation of his study involved the limited data available during the follow-up period. This is because the patient information was de-identified, so the researchers couldn't see how long it took for specific patients to develop Parkinson's after an appendectomy. But because the database has been gathering data since 1997, at least some of the patients were followed for nearly 30 years, he said.

In addition, the researchers didn't have access to patient medical records, so they couldn't look at other factors that may have influenced the results, such as specific symptoms or medications, Cooper added.

The risk is still really low

Ultimately, there still isn't a consensus on if appendectomies are associated with a higher risk of Parkinson's disease.

A 2016 study published in the journal Movement Disorders found similar results to this new study — that an appendectomy was associated with an increased risk of Parkinson's disease risk 10 or more years after the surgery; but that risk was much smaller than that noted in the recent study. Other research, such as a 2018 paper published in Movement Disorders, found little to no association between appendectomies and Parkinson's disease.

This was reminiscent of what Labrie told Live Science last fall, when her paper was published: "One of the things that we don't want to get across to people is that [they] should be having preventative appendectomies or that just because you have an appendix, you're going to get Parkinson's disease."