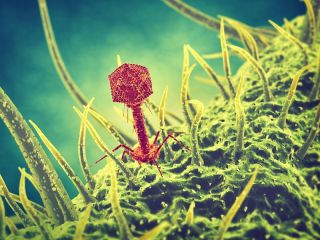 An experimental treatment with bacteria-fighting viruses may have helped save the life of a British teenager with a critical "superbug" infection, according to a new report.

The teenager, 17-year-old Isabelle Carnell-Holdaway, has cystic fibrosis and developed a widespread bacterial infection after receiving a lung transplant to treat her condition in 2017. (Cystic fibrosis is a genetic condition that results in damage to the respiratory system and other organs, and increases the risk of lung infections.) Despite treatment with antibiotics, the bacteria spread to her surgical wound site, her liver and more than 20 other locations on her skin. Her prognosis was grim — one doctor gave her less than a 1% chance of survival, according to CNN.

But that all changed after she was treated with a cocktail of three viruses that specifically attack Mycobacterium abscessus, the dangerous bacterium causing her infection. Two of the three viruses were genetically tweaked to help them better kill the bacteria, making Isabelle's case the first time that genetically modified viruses have been used to treat antibiotic-resistant infections, the authors said.

After her treatment, Isabelle's condition began to improve: her surgical wound gradually healed, as did other areas of infected skin, according to the report, published May 8 in the journal Nature Medicine. She began to gain weight, and has returned to school, CNN reported. [6 Superbugs to Watch Out For]

But how does this therapy work?

The treatment uses special types of viruses known as "bacteriophages," or phages for short, which are ubiquitous on the planet. These viruses have one specialty: they naturally infect bacteria. Once they do so, the viruses replicate inside the bacterial cell, and, through this replicative process, kill the bacterium, said study co-author Graham Hatfull, a professor of biological sciences at the University of Pittsburgh.

But if these bacteria-killing viruses are so effective, why isn't their use more widespread?

In fact, phages are very specific to the bacteria they infect — meaning a given phage may infect only one strain of bacteria — which is a "bit of a double-edged sword," Hatfull told Live Science. On the one hand, the viruses act like "guided missiles to go after the very specific pathogens that a patient is infected with, and leave the rest of the microbiome and all of the other bacteria alone," Hatfull said. That means that phage therapy usually doesn't have side effects. But on the other hand, they can be so specific that a phage that works for one patient with a particular infection may not work for another patient infected with the same species of bacteria, he said.

In Isabelle's case, researchers combed through collection of about 10,000 phages — curated by Hatfull's lab — for ones that would work against the bacterial strain she was infected with. This involved sorting through the 10,000 phages to narrow them down to about 50 to 100 of the best candidates, and screening these candidates individually for their ability to infect M. abscessus, Hatfull said.

Reemerging to fight a growing threat

The idea of using phages to treat bacterial infections has been around for about 100 years, but was largely forgotten with the discovery of antibiotics. It's only been in the last few decades that interest in the area has reemerged,because of the growing threat of antibiotic resistance.

It's important to note that Isabelle still isn't completely cured of her infection. And because this study involved only one patient, the researchers can't say for sure whether Isabelle's recovery was directly a result of the phage therapy (although the evidence suggests that it was).

The researchers said they hope that the new work encourages more studies in this area.

The new case shows that "when we match up a good set of phages with a particular infection in a patient, we can effectively control the infection … and we can save this patient," Hatfull said.

Future studies should examine questions such as which diseases could best be treated with phage therapy, what dose would be needed and how long the therapy would be administered for, Hatfull said.

The new work is just a small step in the big picture of phage therapy, but a "huge step for [this] patient," Hatfull said.