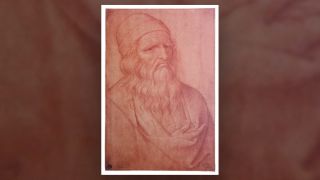 Later in his career, Leonardo da Vinci's ability to use his right hand appeared to be hampered — a problem long thought to have been caused by a stroke. But a new analysis suggests that it was nerve damage to his hand that instead caused this paralysis.

In the paper, published today (May 3) in the Journal of the Royal Society of Medicine, two Italian doctors argued that Leonardo's hand paralysis may resulted from traumatic nerve damage that occurred after the artist fainted. Their conclusion is based on an analysis of a 16th century portrait of Leonardo.

Leonardo was left-handed, but previous studies, including a new handwriting analysis, have suggested that he was also adept at using his right hand. Though he mostly wrote and drew with his left hand, evidence suggests that he typically painted with his right, according to the paper. [5 Things You Probably Didn't Know About Leonardo da Vinci]

The portrait at the center of the new analysis, drawn in red chalk sometime in the 16th century by Italian artist Giovan Ambrogio Figino, depicts an older Leonardo. In the drawing, the famous polymath's right arm is wrapped up in a bandage-like cloth and his right hand is "suspended in a stiff, contracted position," the authors wrote in the paper. In other words, his fingers are slightly bent inward.

But the hand drawn in the portrait doesn't depict the "clenched hand" typical of patients with muscle contractions caused by stroke, they wrote. Rather, "the picture suggests an alternative diagnosis such as ulnar palsy, commonly known as claw hand," co-author Dr. Davide Lazzeri, a specialist in plastic reconstructive and aesthetic surgery at the Villa Salaria Clinic in Rome, said in a statement.

Ulnar palsy is a condition in which fingers become bent like an animal's claw due to damage to the ulnar nerve — a major nerve that runs from the neck down to the fingers and gives the lower arm and hand sensation and the ability to move.

Lazzeri and his co-author Dr. Carlo Rossi, a neurologist at the Hospital of Pontedera in Italy, suggested that his ulnar palsy could have resulted from a trauma, such as fainting and falling down.

What's more, because Leonardo didn't also experience cognitive decline or any other movement issues, a stroke was not likely the cause, Lazzeri said.

Ulnar palsy "may explain why he left numerous paintings incomplete, including the Mona Lisa, during the last five years of his career as a painter, while he continued teaching and drawing," Lazzeri said.