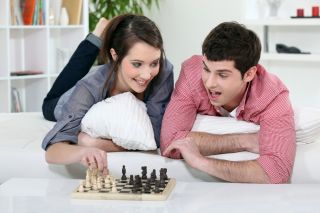 Playing games such as chess may ward off cognitive decline.
(Image: © Chess photo via Shutterstock)

Keeping your brain busy from childhood into old age may help keep dementia and memory loss at bay, even for people who already have early signs of dementia, a new study says.

Mental exercises during both the grade-school years and late adulthood independently contributed to a slower mental decline in old age, according to the study.

About one-third of cognitive decline in older adults could be explained by physical abnormalities in the brain, such as damage from stroke, or plaques of amyloid beta proteins linked to Alzheimer's disease, the study showed. But the amount of cognitive activity throughout a person's lifetime could explain an additional 10 percent of their cognitive decline, the researchers said.

"Cognitive activity is affecting how soon, and how severe, brain pathology is expressed as memory and thinking problems," said study researcher Robert S. Wilson, a neuropsychologist at Rush University in Chicago. [7 Ways to Prevent Alzheimer's Disease]

In the study, Wilson and colleagues looked at brain tissue samples and cognitive test results from 294 people who participated in a long-term aging and memory study, and had passed away during the study. The average age at death was 89.

The participants had been followed for an average of 5.8 years, undergoing cognitive activity and memory tests. They also answered surveys about their childhood and early adulthood cognitive activities, such as how often they read or were read to as a child, and whether they wrote, played games such as chess, and visited theaters and museums in adulthood.

Those who recalled exercising their brain in grade school and at the end of their life had much better brain health compared with those who did these activities less frequently, even after the researchers adjusted to account for their education and levels of amyloid beta plaques and protein tangles in the brain.

The researchers grouped the patients according to the amount of brain-stimulating activities they did near the end of their lives. Compared with people who performed the average amount of activity, those who did the least (the lowest 10 percent) saw 50 percent more cognitive decline, and those who did the most (the highest 10 percent) had 33 percent less cognitive decline.

This means that a person's lifestyle appears to be almost as important in cognitive decline as physical abnormalities in the brain, Wilson said. [5 Experts Answer: What's the Best Way to Improve My Memory?]

Researchers have previously shown that cognitive activities in older adults can help stave off cognitive decline. But there is controversy in the neuroscience and aging field over whether keeping mentally busy can actually delay the formation of protein plaques in the brain, or whether such brain abnormalities are the cause of a decline in mental activity.

This study adds to the evidence for the former theory, that keeping your mind engaged can guard against not only cognitive decline but also dementia, said Lutz Jäncke, professor of neuropsychology at the University of Zurich. But this does not mean training your brain can cure dementia, he added.

Wilson agreed. "There is only so much that lifestyle can do," he said. "If you have enough pathology in the brain, it doesn't make a difference, you will get symptoms."

There may be a threshold for how mental activity must be done to influence cognitive decline, but we don't know what that threshold is yet, according to Wilson.

More studies that include many participants are needed to understand how cognitive activities are linked to physical changes in the brain's neurons.

Still, the new results are an important addition to researchers' understanding of aging and brain plasticity," Jäncke said. "The study adds a new impact to the saying 'Use it or loose it'."

The study is published online today (July 3) in the journal Neurology.