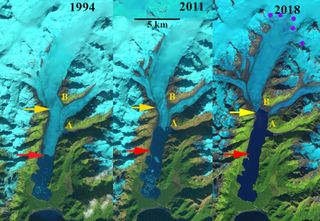 Three Landsat satellite images show how Alaska's Big Johnstone Lake doubled in size from 1994 to 2018. According to glaciologist Mauri Pelto, the lake is growing as the nearby Excelsior Glacier retreats by more than 650 feet (200 meters) per year.
(Image: © Mauri Pelto/ Landsat)

Seventy years ago, Alaska's Excelsior Glacier stretched its cold fingers from a vast plain in the state's southern edge nearly all the way to the North Pacific Ocean. Now, the glacier is separated from the sea by a meltwater lake more than five times the size of New York City's Central Park.

In a recent blog post on the American Geophysical Union (AGU) website, glaciologist Mauri Pelto of Nichols College in Massachusetts shows how that relatively new lake — now called Big Johnstone Lake — has more than doubled in size over the last 24 years as rising global temperatures force Excelsior Glacier into a hasty retreat. [The Coldest Places on Earth]

Big Johnstone Lake first began forming in the 1940s, Pelto wrote, as the glacier started to retreat from the small strip of forest that separates it from the North Pacific Ocean. A series of three images taken by NASA and the U.S. Geological Survey's Landsat satellites over the last 24 years plainly show how Excelsior's demise has accelerated significantly since then. Excelsior Glacier has retreated from the sea by nearly 3 miles (4.7 kilometers) since 1994, losing about 650 feet (200 meters) of ground every year, Pelto wrote. This is roughly double the melt rate seen between 1941 and 1994, he wrote, and the glacier has since lost about 30% of its length in just 24 years.

Meanwhile, Big Johnstone Lake has doubled in size, from 3.5 to 7 square miles (9 square km to 18 square km), and it has been gradually filled by slabs of ice calved from the edge of the melting glacier.

As long as researchers have been photographing the lake, large flotillas of these ice chunks have been plainly visible bobbing through the cold waters like oversized bath toys. But not anymore, Pelto wrote. For the first time, 2018 Landsat images show the lake without any slabs of glacial ice — likely because the lake is close to reaching its maximum size. Near the lake's new northern edge, Excelsior Glacier steepens suddenly, probably lifted by elevated terrain underneath, Pelto wrote.

Even if no more calving ice makes its way into Big Johnston Lake, the glacier will continue to retreat, but probably at a slower pace than the rapid melting observed over the last 25 years. A similar fate has already befallen many neighboring glaciers in Alaska and British Columbia, Pelto wrote, providing yet more examples of how climate change is rapidly redrawing the map of our world.