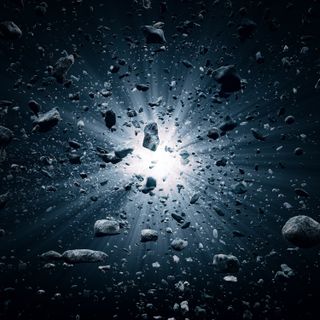 How will the universe end? "Not with a bang but with a whimper," wrote the American poet T.S. Eliot regarding the end of the world. But if you want a more definite response, you'll find that physicists have spent countless hours turning this question over in their minds, and have neatly fit the most plausible hypotheses into a few categories.

"In textbooks and cosmology class, we learn there are three basic futures for the universe," said Robert Caldwell, a cosmologist at Dartmouth University in Hanover, New Hampshire.

In one scenario, the cosmos could continue to expand forever, with all matter eventually disintegrating into energy in what's known as a "heat death," Caldwell said. Alternatively, gravity might cause the universe to re-collapse, creating a reverse Big Bang, called the Big Crunch (we'll explain this later). Or, there is the possibility that dark energy will cause the universe's expansion to accelerate faster and faster, evolving into a runaway process known as the Big Rip. [Does the Universe Have an Edge?]

Before discussing the universe's end, let's go into its birth. Our current understanding is that time and space began during the Big Bang, when a subatomic, ultra-hot and super-dense point exploded outward. Once things cooled down enough, particles began to form larger structures like galaxies, stars and all life on Earth. We are currently living approximately 13 billion years after the universe's start, but, given the different scenarios for its demise, it's unclear how much longer the universe will persist.

In the first scenario — the universe bows out of existence due to heat death — all the stars in the cosmos will burn up their fuel, with most of them leaving behind dense remnants known as white dwarfs and neutron stars. The largest stars would collapse into black holes. While these beasts are not as ravenous as they are often portrayed to be, given enough time, their massive gravitational attraction would draw most matter into their all-consuming maws.

"Then something spectacular could happen," Caldwell told Live Science.

Black holes are thought to give off a special type of emission called Hawking radiation, named for the late physicist Stephen Hawking, who first postulated the theory. This radiation actually robs each black hole of a tiny bit of mass, causing the hole to slowly evaporate. After 10-to-the-100 years (that's the number 1 followed by 100 zeros), all black holes will dissipate, leaving behind nothing but inert energy, according to Kevin Pimbblet, an astrophysicist at the University of Hull in the United Kingdom.

Under the Big Crunch, by contrast, the gravitational attraction of stars and galaxies would one day start pulling the entire universe together again. The process would run sort of like a backward Big Bang, with galactic clusters crashing and merging, then stars and planets fusing together, and finally, everything in the universe would form a dense spot of infinitely small size once again.

Such an outcome provides some temporal symmetry to the cosmos. "It's tidy and clean," said Caldwell. "It's like when you go camping; leave nothing behind."

The final basic possibility for the universe's end is known as the Big Rip. In this scenario, dark energy — the mysterious substance that acts in opposition to gravity — pulls everything apart piece by piece. The cosmos' expansion accelerates until distant galaxies are moving away from us so quickly that their light can no longer be seen. As the expansion quickens, ever-closer objects begin to disappear behind what Caldwell described as a "wall of darkness."

"Galaxies pull apart, the solar system pulls apart, let your imagination run wild," he said. "Planets, and then eventually atoms, then the universe itself." [How Does a Black Hole Form?]

Which "end" will happen?

Because dark energy's properties are not yet well understood, researchers don't know which of these scenarios will prevail. Caldwell said he hopes that observatories in development like NASA's Wide Field Infrared Survey Telescope (WFIRST), or the soon-to-be-deployed Large Synoptic Survey Telescope (LSST), will help to elucidate dark energy's behavior, perhaps providing a better understanding of the universe's end.

There are other exotic prospects for how the cosmos might kick the bucket. Under the known laws of physics, it's possible that the Higgs boson — a particle that is responsible for giving all other known particles their mass — could one day destroy everything. When it was discovered in 2012, the Higgs was found to have a mass around 126 times that of a proton. But it's theoretically possible for that mass to change. That's because the universe might not be in its lowest possible energy configuration right now. The entire cosmos could be in what's known as an unstable false vacuum, as opposed to a true vacuum. If the Higgs were to somehow decay into a lower mass, then the universe would fall into a lower-energy true vacuum state.

If the Higgs suddenly flipped to having a lower mass and different properties, then everything else in the universe would be similarly affected. Electrons might no longer be able to orbit around protons, making atoms impossible. Likewise photons might develop mass, meaning that sunshine could feel like a rain shower. Whether or not any living creatures could survive such a state is unknown.

"I would classify that as a sort of particle physics environmental catastrophe," Caldwell said. "It's not directly causing the demise of the universe — it just makes it a crappy place to live in."