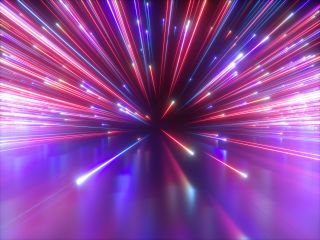 Beneath the surface of the familiar world is a smaller, quantum world that defies our fundamental ideas of time and space.

This idea, called a "quantum switch," was first proposed in 2009 by another team and has since been explored both theoretically and experimentally. Previous experiments showed event A could both precede and succeed event B, but the research couldn't say that these two scenarios were happening at the same place, said Cyril Branciard, co-author of this new study and a physicist at the NÉEL Institute in France. [The 9 Biggest Unsolved Mysteries in Physics]

To determine exactly where these violations of causality occurred, the researchers "implemented another quantum switch with a slightly different architecture," Branciard told Live Science. The new design allowed them to demonstrate experimentally that event A was happening both before and after event B not only at the same time, but also in the same place, Branciard told Live Science.

Branciard and his team programmed and observed how a photon — a quantum particle of light — moved its way through a circuit. The photon could take one of two paths: If the photon took one path, they called the occurrence event A, and if it took the other, they called it event B.

A photon is can be thought of as both a particle and a wave. If the researchers used a photon with a horizontal polarization— the direction in which these waves oscillate— the photon would first travel path A and then travel backward to pass through path B, meaning event A happened before B. If they vertically polarized the photon, the photon would travel first through path B, then A, meaning B happened before A.

There's a catch, however: Physicists can't actually see or measure what the photons are doing; the very act of measurement destroys the superposition. "The measurement would force the photons to 'choose' to follow one order or the other," Branciard said.

Instead, they set up a series of "obstacles," or optical elements such as lenses and prisms, that indirectly made the two events distinguishable from each other. As the photons traveled through the paths, the lenses and prisms changed the shape of the waves of each photon. This, in turn, altered their polarization— a direction that can be both up ,down, sideways, or really at any angle, according to Branciard. At the end of the photons' journeys, the researchers could measure the new polarization.

Branciard and his team set up their optical elements in different ways such that they can conduct many trials with various settings. A combination of measurements taken throughout the experiment served as a "causal witness" — a value that, if negative, meant that the photons would have traveled both paths at the same time.

Indeed, when photons were in this state of superposition, the causal witness was negative, showing that the photons traveled both paths at the same time, meaning "before" and "after' meant nothing to these tiny particles. Event A caused event B, and event B caused event A at the same time.

In the future, this quantum switch could enhance communication in quantum devices, Branciard said.