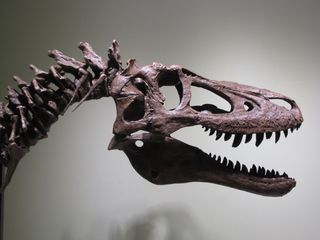 A reconstruction (that is, not the actual skeleton) of the baby Tyrannosaurus rex that is now for sale on eBay.
(Image: © Alan Detrich)

The partial skeleton of a baby Tyrannosaurus rex is for sale on eBay for nearly $3 million. And while it's anyone's guess who (if anyone) will buy the "king of the dinosaurs," the seller is certain of one thing: The specimen will inevitably end up in a museum, he said.

"I'll guarantee you it will" eventually land in a museum, Alan Detrich, a sculpturist and professional fossil hunter in Kansas who is auctioning the T. rex, told Live Science. According to Detrich, if some billionaire purchases the specimen, he or she will likely — for tax purposes — gift the dinosaur to a museum one day.

In that case, "everybody is happy because the [T. rex] is in a museum, and the billionaire got patted on the back and rode off into the sunset on the back of a dinosaur," Detrich said. [In Images: A New Look at T. Rex and Its Relatives]

Detrich listed the baby T. rex on eBay on Feb. 26, and the paleontological community has been in an uproar ever since. Legality has nothing to do with the anger. Detrich's brother Bob found the beast's fossilized bones near Jordan, a town in eastern Montana, in 2013. Detrich was leasing the land, which was private property, meaning anything found on the land belonged to Detrich.

Rather, paleontologists are upset because if a private individual buys the baby dinosaur king, that person is under no obligation to share it with the scientists who are keen to study juvenile T. rex specimens. Moreover, even if the predator's remains were lent to an institution or made available for study, most paleontologists don't like to study fossils unless they're donated, meaning the specimen would be available for study in perpetuity, and not just when the owner feels like making it accessible.

That's precisely what happened in 2016, when a privately owned, 120-million-year-old specimen from Brazil drew controversy: A group of scientists called it the first four-legged snake on record, and another group announced that it wasn't a snake at all, but likely a dolichosaurid, an extinct snake-like marine lizard. It's anyone's guess what the creature really is, as the specimen's owner has declined to let anyone else study the fossil.

After digging up the bones, Detrich immediately knew they belonged to a theropod (a group of bipedal, mostly meat-eating dinosaurs), but he didn't know it was a T. rex until he took it to Peter Larson, a paleontologist and president of the Black Hills Institute of Geological Research in South Dakota.

Excited, Detrich took the fossils home to Kansas and cleaned them up. Then, in honor of his late mentor, Larry Martin, a vertebrate paleontologist and curator of the Natural History Museum at the University of Kansas, he lent it to the museum.

"In honor of Larry, I thought it would be a good thing if I loaned this thing to the museum," Detrich said. "They could study it, they could show thousands of people this specimen, and they have." Paleontologists contacted by Detrich looked at the bones and estimated that the dinosaur, initially named "Baby Bob" and later "Son of Samson," was about 4 years old when it died during the late Cretaceous, about 68 million years ago. [Gory Guts: Photos of a T. Rex Autopsy]

But after Son of Samson was on display for two years, Detrich felt like "I did my fair share of giving," and he posted it on eBay for $2.95 million. He didn't initially tell the museum about his plans, but when museum officials found out, they asked that he remove their name from the eBay posting, so they wouldn't be associated with the auctioning of dinosaur fossils.

In a statement, museum director Leonard Krishtalka said, "The KU Natural History Museum does not sell or mediate the sale of specimens to private individuals. Accordingly, the specimen on exhibit-loan to us has been removed from exhibit and is being returned to the owner. We have asked that the owner remove any association with us from his sale listing."

The Society of Vertebrate Paleontology also decried the sale: "Vertebrate fossils are rare and often unique," the society said in a statement. "Scientific practice demands that conclusions drawn from the fossils should be verifiable: scientists must be able to reexamine, remeasure and reinterpret them (such reexamination can happen decades or even centuries after the fact)."

Studying privately owned specimens is so discouraged that Robert Boessenecker, a postdoctoral researcher in the Department of Geology and Environmental Geosciences at the College of Charleston in South Carolina, who isn't involved with the T. rex specimen, said he wouldn't study any, even if the owner offered to lent it to him or a museum.

In fact, it's common for people to try to drop off privately owned specimens for Boessenecker to identify, shed light on or even put on temporary display.

"That has already happened, and I have thanked them for their generosity, but explained that because museums serve as a center of research, that any fossil that enters the museum for a long-term period should be owned by the museum," Boessenecker said. "If we're going to put it on display, it has to be a fossil that has been donated or otherwise permanently accessioned [added] into our collection."

He added that most museums don't have the budget to purchase high-priced specimens. (An exception is Sue, the most complete T. rex on record, who was sold to the Field Museum of Natural History in Chicago for $8.4 million in 1997.) Instead, most research institutions opt to spend less money by sending their own researchers out into the field to find fossils, or rely on the generosity of donors, Boessenecker said. [Photos: Velociraptor Cousin Had Short Arms and Feathery Plumage]

Boessenecker added that many paleontologists have good relationships with fossil collectors, who often clue in researchers to fossil hotspots and exciting finds. But if they want to loan a specimen, it's just not worth it, Boessenecker said, in part because the museum is responsible for the housing and safety of any fossils in its possession. (He detailed other challenges in this Twitter thread.)

Moreover, Detrich's eBay listing hints that the juvenile T. rex might solve the Nanotyrannus mystery once and for all. In short, some experts think that Nanotyrannus is a separate species, but most paleontologists think it's simply a baby T. rex. However, while the teeth of such a specimen would shed light on the mystery one way or the other, Boessenecker noted that Son of Sampson's jaw is highly fragmented and part of it may be missing — so it likely wouldn't solve the case.

In the meantime, the Society of Vertebrate Paleontology discouraged institutions from putting loaned items on display.

"We strongly recommend that repositories, exhibitions and scientists stay at arm's length from specimens that are not yet permanently in the public trust," the society said in the statement. To give an example, "The Museum für Naturkunde [Natural History Museum] in Berlin is currently exhibiting and studying a privately owned tyrannosaur skull, a specimen that could just as easily be removed from the public trust as Detrich's juvenile," the society said.

While there are no bids on the T. rex yet, as Detrich told Live Science, "All you need is one."