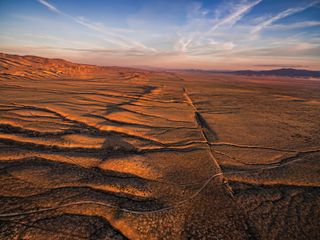 An aerial view of the San Andreas Fault.
(Image: © Shutterstock)

Southern California is a lot shakier than ever before realized. According to a new study, a tiny earthquake rumbles through the southern portion of the Golden State every 3 minutes.

These temblors won't knock down walls or send palm trees swaying. In fact, they're too small for even typical seismic instruments to regularly detect. But their discovery reveals seismic activity that scientists couldn't previously detect. Understanding the full pattern of activity should help seismologists understand how larger earthquakes get started and how quakes can trigger one another.

"The Earth is failing all the time," said study author Zachary Ross, a postdoctoral researcher in geophysics at the California Institute of Technology. "What really starts to come out is that these events, they're really communicating with each other in space and time." [13 Crazy Earthquake Facts]

Humanity is naturally most interested in large, damaging earthquakes, Ross told Live Science, the kind that take lives and bring cities to a standstill. But those quakes don't happen on the same time scale as human lifetimes. On a single fault, one big quake might occur every century, or even every thousand years.

Smaller quakes are a lot more frequent. For each drop in unit of magnitude, there are 10 times more quakes, Ross said — so for every magnitude 7.0 temblor, for example, there are 10 magnitude 6.0 quakes, 100 magnitude 5.0 quakes and so on.

Even seismometers don't easily differentiate the smallest of these shakes from the background noise of the environment, Ross said. The standard catalog of Southern California quakes put out by Caltech and the U.S. Geological Survey catches everything of magnitude 1.7 and above, he said.

Now, Ross and his team have found a way to tease out quakes as small as magnitude 0.3 from that same data. The trick, Ross said, is that two quakes with similar epicenters will show almost the same pattern of shaking on a seismogram, even if one is much larger than the other. The researchers used known earthquakes as templates, searching for smaller but otherwise identical squiggles in the earthquake record.

The method turned up a whopping 1.8 million tiny twins to known quakes over a period of 10 years. From 2008 to 2017, Southern California experienced an average of 495 tiny quakes a day, one every 174 seconds, Ross and his colleagues reported today (April 18) in the journal Science.

As staggering as those numbers are, they're exactly what you'd expect given the rule of thumb of 10 times as many quakes per unit of magnitude, Ross said.

"We get ten times as much information now, and it should be allowing us to test out all sorts of new things that we couldn't have done in the past," he said.

One example: In 2012, California's Imperial Valley experienced a series of earthquakes known as the Brawley Earthquake Storm. There were hundreds of tiny quakes, and two slightly damaging ones reaching magnitudes of 5.3 and 5.5. Using the newly fleshed-out data set, Ross and his team found that this earthquake swarm actually began with 10 additional hours of subtle, previously unnoticed shaking.

The team also used the data to investigate the aftermath of the 7.2-magnitude El Mayor-Cucapah earthquake that shook Baja California, Mexico, in 2010. There was a noticeable spike in extremely low-level quakes for the week after that shock at distances up to 170 miles (275 kilometers) away from the fault, the researchers found. These nearly undetectable shifts could explain how quakes affect each other over long distances, Ross said.

The same template-matching technique could be useful far beyond Southern California, Ross added. Any region or country with a good seismic network and high-quality data record could search their own history for tiny quakes, he said.

"I think this is going to really lead to a whole new wave of scientific analysis," he said.