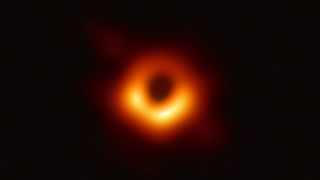 This image by the Event Horizon Telescope project shows the event horizon of the supermassive black hole at the heart of the M87 galaxy.
(Image: © EHT Collaboration)

DENVER — Last week, the Event Horizon Telescope (EHT) released the first-ever image of a black hole's shadow cast against the hot gas of its accretion disk. That image, of the black hole at the center of galaxy Messier 87 (M87), was front page news all over the world. Soon, the EHT will produce the first movie of that hot gas whirling chaotically around the shadow, said project leaders who spoke Sunday (April 14) here at the April meeting of the American Physical Society.

The EHT isn't a single telescope. Rather, it's a network of radio telescopes all over the world making precisely timed recordings of radio waves all together, and these recordings can be combined such that the different telescope all act as one. As more individual radio telescopes join the EHT and the team updates the project's recording technology, the detail of the images should increase dramatically, Shep Doeleman, the Harvard University astronomer who lead the EHT project said in his talk. And then, the team should be able to produce movies of black holes in action, he said.

"It turns out that even now, with what we have, we may be able, with certain prior assumptions, to look at rotational signatures [evidence of the accretion disk swirling around the event horizon]," Doeleman said. "And then, if we had many more stations, then we could really start to see in real time movies of the black hole accretion and rotation." [9 Ideas About Black Holes That Will Blow Your Mind]

In the case of the black hole in M87, Doeleman told Live Science after his talk, making a movie will be pretty straightforward. The black hole is enormous, even for a supermassive black hole at the center of a galaxy: It's 6.5 billion times the mass of Earth's sun, with its event horizon — the point beyond which not even light can return — enclosing a sphere as wide as our entire solar system. So, the hot matter of this black hole's accretion disk takes a long time to make a single trek around the object.

"The time scale over which [M87] changes appreciably is greater than a day. That's great," Doeleman said, because it means the EHT to shoot a movie of the object one frame at a time.

"We can … make our image. Then, if we want to make another one, or a time-lapse movie, then we just go out the next day or the next week. And we might do it seven weeks in a row and get seven frames of a movie and then kind of see something move around in that way," he said

But the M87 black hole isn't the only supermassive black hole that the EHT is observing. The team is also looking at Sagittarius A*, the supermassive black hole at the center of our own galaxy, and plans to release the first image of that object soon. And the EHT researchers also aim to make movies of that much nearer and better-studied black hole, but that project will be more complicated, Doeleman said. [11 Fascinating Facts About Our Milky Way Galaxy]

SagA* is about 1,000 times less massive than the M87 black hole, Doeleman said, so the image changes 1,000 times more quickly.

"So, what that means is it will change in minutes or hours," Doeleman said. "You have to develop a fundamentally different algorithm, because it's as if you have the lens cap off on your camera and something's moving while you're taking an exposure."

To make a movie, he said, the EHT would not only have to collect all the data necessary to produce an image of the black hole, but also break up that data up into different chunks by time. Next, the team would compare those chunks to one another using sophisticated algorithms to figure out how the image changed even as it was being captured.

This approach uses models of how the image would be expected to move, comparing those models to the actual data to see if it fits.

"You've got to be smart and figure out how data from this time slice is related to that time slice right after," Doeleman said. "So, for example, you could say, 'OK, you can move but you can't move that far.'"

Using those sorts of constraints, he said, the team can convert even very limited amounts of data from any given minute into complete pictures of SagA* in motion. As a result, the team expects to make movies of the smaller black hole in a single night.

Those movies, said Avery Broderick, an astrophysicist at the University of Waterloo in Canada who works on interpreting the EHT's images, should reveal new details about the behavior of accretion disks around black holes, including how they gobble up matter.

"We'll be able to map space-times by looking at black hole cinema, not portraiture," Broderick said.