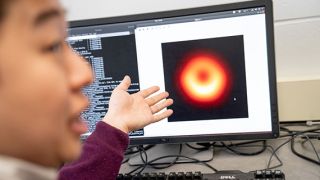 Kazunori Akiyama, a coordinator of the EHT Imaging Working Group, is pictured with the image during the process of checking the data.
(Image: © Nancy Wolfe Kotary, MIT Haystack)

It's a supermassive black hole at the center of galaxy Virgo A (also called Messier 87 or M87), and it's so large — as wide as our entire solar system — that even 53 million light-years away, it looks as big in the sky as Sagittarius A*, the smaller but still-quite-supermassive black hole at the center of our own galaxy. This announcement is the first result from an effort that began in April 2017, involving every major radio telescope on Earth — collectively termed the Event Horizon Telescope.

So, if these objects are so huge and the telescopes were already out there, why did scientists figure out how to image them only recently? And once they figured it out, why did it take two years to produce an image? [9 Weird Facts About Black Holes]

To answer the first question simply: Black holes of this size are very rare. Every large galaxy is thought to have just one at its center. They're typically quite dark, shrouded in clouds of dense matter and stars. And even the nearest one, in our own galaxy, is 26,000 light-years from Earth.

But the new image doesn't reveal the first light humans have detected from a black hole. (And the image is not made from light as we typically imagine it; the electromagnetic waves the telescope spotted are very long radio waves. If you were closer to the black hole, you would see a visible-light shadow as well, though.)

As far back as 1931, according to the Armagh Observatory and Planetarium, the physicist Karl Jansky noticed that there was a bright point of radio-wavelength activity at the heart of the Milky Way. Physicists now strongly suspect that this point is a supermassive black hole. Since that discovery, physicists have long detected other black holes by their radio signatures.

What's new here is that the Event Horizons Telescope imaged the shadow that the black hole creates against the surrounding, glowing matter of the object's accretion disk (the hot matter falling quickly toward the black hole's event horizon). That's exciting to physicists because it confirms some important ideas about what that shadow should look like, which in turn confirms what scientists already believed about black holes.

To image the shadow, astrophysicists had to detect those radio waves in unprecedented detail. No single radio telescope could do it. But physicists figured out how to network all of them, all around the Earth, together to act as one giant telescope, as Sheperd Doeleman, a Harvard University astrophysicist and director of the Event Horizon Telescope, said at a National Science Foundation news conference.

Each radio telescope captured a vast amount of incoming radio photons, but with nowhere near enough detail to spot the shadow of the black hole surrounded by its accretion disk. But each telescope's perspective on the image was a little different. So, the scientists painstakingly combined the slightly different data sets and, with the aid of atomic clocks, compared when the radio photons arrived at the different instruments. In this way, the physicists were able to tease out the black hole's signal from lots of noise.

The telescopes collected the actual data used to produce the image over the course of just three days in April 2017. This amounted to more than 5 petabytes in total, about as much information as the entire Library of Congress. It was stored on a vast collection of hard drives that together measured in the tons, Dan Marrone, an astrophysicist and one of the collaborators on the project, said in the news conference.

That's so much data that sending it over the internet was pretty much impossible, he said. Instead, the physicists gathered the information all in one place by physically shipping the hard drives.

Researchers spent the next year using computers to refine and interpret that data until this image emerged, Marrone said. They spent the year after that checking their results and writing up papers. Water in the atmosphere, stray radio photons from other sources and even tiny errors in the telescope data all conspired to muddle the data. Most of the work of the project, therefore, consisted of careful math to account for all those errors and the noise in the data, with the work slowly uncovering the image hiding behind those issues.

So in a certain respect, taking a photo of a black hole happens pretty quickly. It's developing it that takes a very long time.