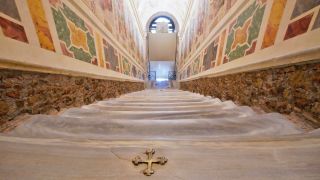 A view of the newly restored Holy Stairs (Scala Sancta), which, according to the Catholic Church, were used by Jesus on the way to his crucifixion.
(Image: © Andrew Medichini/AP/Shutterstock)

Over the past week, several news outlets have reported that the "Holy Stairs" — said to have been climbed by Jesus on his way to face trial — have been restored and reopened in Rome.

Yes, the stairs are restored, the wooden casing covering them has been removed for the first time in nearly 300 years, and they will remain open until June 9. But experts told Live Science that it's highly unlikely Jesus actually climbed these stairs.

The Holy Stairs (also known as the Scala Sancta or Scala Santa) consist of 28 marble steps that, according to legend, are from the praetorium in Jerusalem. That was a palace used by Pontius Pilate, the Roman prefect of Judea who presided over the trial of Jesus that ended in Jesus being crucified. Legend has it that Jesus walked up the steps on his way to trial and that Helena, mother of the Roman Emperor Constantine (who reigned from the year 306 to 337), brought the stairs to Rome after a pilgrimage to the Holy Land. [Religious Mysteries: 8 Alleged Relics of Jesus]

For centuries, it has been a tradition that visitors who wish to climb up the stairs do so on their knees. For the last 300 years, the marble steps have been covered with wood to protect them; however, the wood was removed during the restoration, allowing the stairs to be seen for the first time in April.

Archaeologists and historians contacted by Live Science said that the stairs are probably not from the palace used by Pontius Pilate.

"From a scientific standpoint, I put the likelihood that these steps came from Pilate's palace in Jerusalem at about zero," said Jodi Magness, an archaeologist and professor of religious studies at the University of North Carolina at Chapel Hill.

Other experts noted some of the historical discrepancies that make this Jesus claim highly unlikely. [Proof of Jesus Christ? 6 Pieces of Evidence Debated]

"Since very little marble was used in [Israel-Palestine] prior to the second century, there is very little chance, I am afraid, that the staircase is authentic," said Orit Peleg-Barkat, a lecturer at the Hebrew University's Institute of Archaeology in Jerusalem.

And the timeline doesn't really work.

"Pilate's palace was destroyed with the rest of Jerusalem by the Romans in [the year] 70 and razed to the ground," long before Helena visited the Holy Land, Magness said. Also Pilate's palace would have originally been built by King Herod and neither Herod, nor anyone else in his kingdom, used marble for construction.

"Marble is not found anywhere in Palestine and was almost never used in construction, certainly not in Herod's time — or before 70 for that matter," Magness added.

Analysis of the surviving palaces and other structures built by King Herod shows that "local materials covered with plaster or stucco in imitation of marble" were used, Magness said. "Even Herod's recently discovered mausoleum at Herodium is constructed of local white stone, not marble," Magness said. The Holy Stairs, on the other hand, "are clearly genuine marble, presumably from somewhere in the Aegean [Sea region]— I assume that scientific analyses could determine the source," Magness said.

Patrick Geary, a professor of medieval history at the Institute for Advanced Study in Princeton, New Jersey, said that "there is no reason to believe — other than faith — that these steps were from the Roman praetorium in Jerusalem." Geary has done an extensive amount of research and writing on medieval relics, including those linked to the historical Jesus. The legend that describes Helena bringing the stairs to Jerusalem also claims that she found a piece of the cross on which Jesus was crucified, Geary said.

Julia Smith, a professor of medieval history at the University of Oxford who has also researched medieval relics, agreed that the stairs are likely not those used by Jesus. "In popular legend, the steps were part of Pilate's palace in Jerusalem and then brought to Rome by Helena. It is precisely that — a legend."

Smith said that the stairs may have been an attempt to create a replica. "There are many aspects of the topography of Jerusalem which were replicated in Rome by being mapped onto existing structures in the city, and in my view, the Scala Sancta is one of them."

While Jesus probably did not use these steps, "the tradition and not the archaeological truth is what matters" to many people, Peleg-Barkat said.