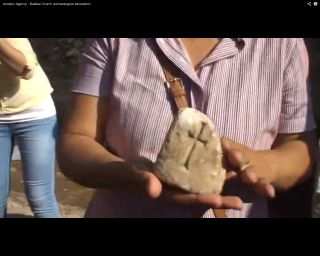 A section of the stone chest that reportedly held a piece of wood, one that's possibly a relic of Jesus' cross.
(Image: © YouTube screen grab from Anadolu Agency.)

Archaeologists working at the site of an ancient church in Turkey believe they may have found a relic of the cross of Jesus.

The relic was discovered inside a stone chest, unearthed from the ruins of Balatlar Church, a seventh-century building in Sinop, Turkey, situated on the shores of the Black Sea.

"We have found a holy thing in a chest. It is a piece of a cross," lead archaeologist Gülgün Köroğlu told the Hurriyet Daily News. She displayed a piece of the stone chest with a small cross carved into it to reporters at the site. [Religious Mysteries: 8 Alleged Relics of Jesus]

"This stone chest is very important to us. It has a history and is the most important artifact we have unearthed so far," Köroğlu said. The chest has been taken to a laboratory for further study, NBC News reports.

The cross upon which Jesus was crucified has been the object of much religious interest, as well as some controversy. Numerous churches around the world claim to possess a small relic of the wooden cross, but the authenticity of the relics is doubted by some critics.

Protestant theologian John Calvin, a famed 16th-century skeptic of religious relics like the so-called "true cross," once remarked that "if all the pieces that could be found were collected together, they would make a big ship-load."

Other purported Christian relics, including a 2,000-year-old ossuary embellished with obscure carvings that was first discovered in 1981, are also of disputed origins.

The ossuary, sometimes referred to as the "Jonah Ossuary" because one carving seems to show a fish swallowing a man (like Jonah, the biblical figure who was swallowed by a whale), was initially heralded as the earliest known Christian artifact. Later analyses by classical and biblical scholars, however, revealed that many of the supposed Christian symbols were just random marks or decorative carvings that were misinterpreted.

Another ossuary, said to hold the bones of Jesus' brother and put on display at a Toronto museum in 2002, is also controversial, with its authenticity hotly debated. And then there's the so-called Gospel of Jesus' Wife, claimed to be from the fourth century and to be the first ancient evidence of Jesus speaking of a wife. The business-card-size papyrus is highly contested, with many saying it is a forgery.

Köroğlu's team has been working at the Balatlar Church site since 2009. Their archaeological dig has yielded some surprises, including more than 1,000 human skeletons. The church, constructed in A.D. 660, also has frescoes on its walls depicting Jesus, Mary and the Apostles.