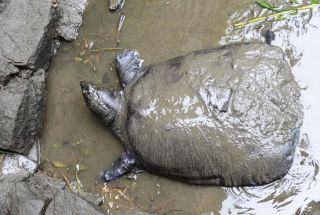 The Yangtze giant softshell turtle (Rafetus swinhoei) is considered the most critically endangered turtle in the world, with only four known individuals left on Earth. On Saturday (April 13), that population fell to three, as the species' last known female died in a zoo in Suzhou, China, according to the BBC.

The captive turtle was more than 90 years old and died shortly after an attempt to artificially inseminate her, the BBC reported. No complications from the insemination procedure (which was the turtle's fifth) were reported, and the cause of death is being investigated.

The rare turtle is survived by one male, who also lives in the Suzhou Zoo and is believed to be about 100 years old. Scientists had been trying to breed the pair for years, a 2018 New Yorker article reported, but were unsuccessful due, in part, to the male's damaged penis.

The world's final two known R. swinhoei turtles live in separate ponds in Vietnam. Their genders are unknown. The species used to be widespread in the fresh waters of China and Vietnam, according to the New Yorker, but have dwindled to near-extinction due to hunting and habitat loss.

This is a sadly common story. According to a 2018 report from the Zoological Society of London, turtles and tortoises account for 29 of the world's 100 most endangered reptiles, "despite representing only 3.3% of reptilian species richness."

True to their names, Yangtze giant softshell turtles can be huge, growing to more than 360 lbs. (163 kg), the New Yorker reported.