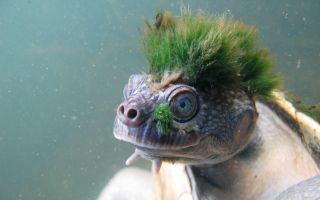 Algae sprouts from the Mary River turtle's head like a gnarly mohawk. The turtle has no close living relatives and has been designated an Evolutionarily Distinct and Globally Endangered (EDGE) species.
(Image: © Chris Van Wyk/ZSL)

The Mary River turtle doesn't take its name from '80s alt-rock icons The Jesus and Mary Chain, though we wouldn't fault you for the guess. With whisker-like growths forking out of its chin and shocks of algae bursting off of its head like a punky green mohawk, the freshwater swimmer looks as much like an aging rocker as it does an endangered species.

The Mary River turtle (Elusor macrurus) is actually named for the Mary River in Queensland, Australia, which is the only place on Earth where it lives. The rare turtle ranks 29th on a new list of the world's 100 most endangered reptiles, released last week (April 10) by the Zoological Society of London (ZSL).

The new list is part of the ZSL's EDGE of Existence program (EDGE is an acronym for "Evolutionarily Distinct and Globally Endangered" species), which casts a spotlight on some of the world's most unique and extinction-prone species that live far out on their own branches of the tree of life.

Species like the Mary River turtle have few close relatives on Earth; according to the EDGE website, these turtles diverged from all other living species around 40 million years ago. As such, they "represent a unique and irreplaceable part of the world's natural heritage" that is at risk of being lost forever; one 2017 study estimated there may be as few as 136 of them left in the wild. The aim of EDGE is to increase awareness and protection of these far-out creatures before it's too late.

The Mary River turtle has emerged as an unofficial poster child for the list of rare reptiles, thanks mainly to its irresistibly odd appearance. In addition to its algae-engulfed body, the turtle has some biological bona fides. For one, it can breathe out of gill-like glands in its cloaca — the multipurpose orifice many reptiles use for both excretion and mating — and can thus stay underwater for up to three days, according to EDGE.

Turtles and tortoises account for "29 of the top 100 EDGE reptiles, despite representing only 3.3 percent of reptilian species richness," the researchers wrote in a new study, published online April 11 in the journal PLOS ONE, that accompanies the list. The top spot on the reptile list goes to the Madagascar big-headed turtle, a prehistoric-looking, sometimes rainbow-tinted reptile whose lineage stretches back 80 million years. The species is critically endangered, but conservation efforts are underway, EDGE reported.