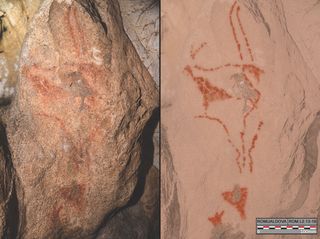 Inside the Romualdova cave in Croatia, scientists found drawings of an ibex as well as lines and shapes.
(Image: © A. Ruiz-Redondo)

Inside of a cave overlooking the blue-green waters of Croatia's northern coast, archaeologists have found wall paintings that date back to the Upper Paleolithic period.

While prehistoric cave art is plentiful in western Europe, the discovery marks the first time cave art of this age has been documented in the Balkans. The reddish paintings, which depict a bison and ibex, could have been created more than 30,000 years ago, scientists reported Wednesday (April 10) in the journal Antiquity.

"It is quite an important discovery, mostly because it is in a region where no cave art had been known up to now," said Jean Clottes, a French prehistorian, who wasn't involved in the new study. "From the photos there is no doubt about their belonging to the Upper Palaeolithic." [The 10 Biggest Mysteries of the First Humans]

The paintings were documented inside Romualdova Pećina, a deep cave extending to a depth of 360 feet (110 meters) along a canyon-like estuary known as the Limski Kanal. During the Upper Paleolithic period, Europe would have been colder than it is today and sea levels were lower. So anyone who took shelter in Romualdova Cave would have looked out onto a river that flowed toward a vast, fertile plain (where the Adriatic Sea is today).

The study's author Aitor Ruiz-Redondo, an archaeologist at the University of Southampton in the U.K., started looking for cave art in the region as part of a French-funded project. Ruiz-Redondo and his colleagues surveyed more than 60 prehistoric caves and rock shelters across Bosnia and Herzegovina, Croatia, Montenegro and Serbia; Romualdova Cave was one of just two sites that had clear evidence of Palaeolithic rock art.

The cave art is not so well preserved. The paintings had been applied to a fossilized calcite layer of the cave wall, which has crumbled away in some areas. Graffiti from the late 19th century and early 20th century has obscured some of the motifs, and the cave was not protected by local heritage authorities until recently.

"Uncontrolled visits have provoked the destruction of most of the paintings, so now we only can see a small part of what Romualdova rock art was originally," Ruiz-Redondo told Live Science.

For that reason, it was difficult for the researchers to make out many of the motifs that covered the walls, but they did identify a bison and ibex, two animals commonly featured in cave art in western Europe. They also found two figures that they think could be human silhouettes.

The researchers are still trying to resolve the age of the artworks, and they have two hypotheses. One is that the paintings were created between 34,000 and 31,000 years ago, during the early Upper Paleolithic, which would fit well with the style of the paintings and some archaeological evidence found in the caves, the researchers said. Based on the age of charcoal samples excavated beneath the paintings, the other possibility is that the artworks date to a later Upper Paleolithic period, called the Epigravettian, around 17,000 years ago. The researchers hope future excavation and analysis will settle the age of the art.

At least stylistically, Clottes thought the paintings could be fairly old, perhaps contemporary with 30,000-year-old art found in the Coliboaia cave in Romania.

Because of the number of impressive cave art sites, such as Chauvet Cave and Lascaux Cave, both in France, western Europe had long been considered the birthplace of art. Margaret Conkey, another cave art expert and a UC Berkeley professor emerita of anthropology who wasn't involved in the study, said this new finding and others "all point to the fact that there is no one origin for the production of visual images and 'art.'"

Ruiz-Redondo said the paintings hint at long-distance contacts between groups of people during the Upper Paleolithic.

"As archaeologists our objective is not to study the artworks themselves, but the information that they can offer about the societies and individuals that produced them," Ruiz-Redondo told Live Science. "In this case, expanding the Upper Paleolithic cave art to a new area is really interesting, because it implies linking the culture of the groups that painted Romualdova with cultural features from groups well documented in Spain, France and Italy."