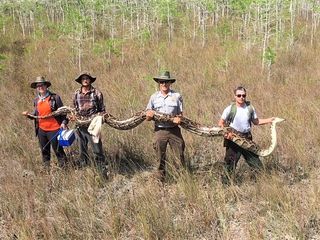 It took four adults to hold this 17-foot-long (5.1 meters) burmese python, which is an invasive species in Florida.
(Image: © National Park Service)

Wildlife officials have captured a 17-foot-long (5.1 meters) Burmese python and a mother-to-be in Florida's Big Cypress National Preserve — the longest python ever found in the preserve, which neighbors the Everglades.

But even though her size and her weight of 140 lbs. (63 kilograms) likely puts her in the top 10% of the largest wild pythons in Florida, the number of eggs found inside her — 73 in all — is absolutely flooring, said David Penning, an assistant professor of biology at Missouri Southern State University, who was not involved with the snake's capture.

"I would say that's far above average," Penning told Live Science. "A normal quantity to expect is probably a couple dozen, maybe 40 or 50. And that would be a good year if you were trying to breed these animals." [Image Gallery: Snakes of the World]

Burmese pythons (Python bivittatus) are an invasive species in Florida. They likely got into the wild not only because of pet owners who decided to release them, but also from hurricanes that aided in their escape from captivity. Given that they're invasive, why are pythons so successful in the Sunshine State?

Mothers such as this one are part of the answer, Penning said. Now that it's springtime, mother snakes are laying eggs. These 4- to 5-inch-long (10 to 13 centimeters) oval eggs take up so much space inside the mother, that she has to stop eating because she literally can't fit anything else inside her body, Penning said. Even her organs get scrunched and pushed out of the way.

"It's impressive," he said. "It's like shoving a bunch of pool balls into a sock, but there's just more than what seems like [the snake] can fit."

After developing in the mother for about two to three months, the eggs are laid in a conical pile. Then, the mother stays with her eggs, shivering next to them to keep them warm, Penning said.

"It's probably one of the reasons they're so effective at being an invasive species," Penning said. "If you're an egg, you're pretty defenseless. If you're an egg with a 17-foot mom hanging out next to you, you're probably a little bit more protected."

Once the eggs hatch, the babies go their separate ways. But, intriguingly, these snakes tend to find niches and prey that fit their body size; small snakes find habitats with small prey, and larger snakes find larger prey, including prey that lives in the water.

"They have cordially set aside who and where they'll live and eat," Penning said. "It's called an ontogenetic shift; as they get bigger, they start to eat bigger things and drop out the littler things, which means more babies have littler things."

On top of that, Burmese pythons are good at hiding and capturing prey, chowing down on everything from a field mouse to a deer. Since these snakes began invading Florida, sightings of rabbits, foxes, raccoons, white-tailed deer and opossums in the Everglades have dropped by more than 90 percent, a 2011 study in the journal Proceedings of the National Academy of Sciences found.

"They have essentially inserted themselves as an apex predator and are consuming anything that can fit inside their mouth," Penning said.

However, Burmese pythons are listed as vulnerable in their native range of Southeast Asia, largely because humans have taken to making them into products, such as boots. "It's become such a problem that their population needs to be monitored, and we need to increase them, except in Florida, where we're having the opposite problem," Penning said.

This particular mom snake was found after researchers tagged a male python with a radio transmitter and followed him in his search for a new mate. This method helps researchers locate and remove invasive snakes, as well as collect data for research, according to the preserve's Facebook post.