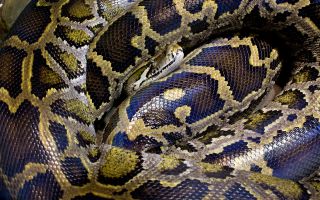 A reticulated python, like this one shown here in the Bronx Zoo in New York City, attacked and ate a woman in Indonesia.
(Image: © Andrew Lichtenstein/Corbis/Getty)

News of a pickup-truck-size reticulated python killing and swallowing a woman whole in central Indonesia, eating even her clothes, has made headlines around the world. But how often do these snakes eat people?

Very infrequently, it turns out.

"In natural environments, it's incredibly rare," said David Penning, an assistant professor of biology at Missouri Southern State University. "It's probably more rare than snake injuries among people who have big pythons and boas and don't take the proper safety precautions." [Photos: This Python Chowed Down on 3 Deer]

However, these fatal attacks are not unheard of, and instances of wild, giant snakes eyeing people as potential prey may increase as humans clear more wildlife habitats to create farmland and homes, Penning told Live Science.

Encounters with wild snakes are more common among indigenous people who live in the rainforest alongside the snakes than they are among people who live in developed areas. In a 2011 study published in the journal Proceedings of the National Academy of Sciences, researchers examined interviews with 120 Philippine Agta Negritos conducted in 1976, and found that 15 of the 58 (26 percent) adult men and 1 of the 62 (2 percent) Agta women had survived an attack by a reticulated python. Moreover, six people died from python attacks there between 1934 and 1973, according to information gleaned from the interviews, the researchers found.

In the recent Indonesian case, 54-year-old Wa Tiba went out Thursday night (June 14) with a flashlight to check on her vegetable garden, which is located in a rocky area on Muna island covered in caves and cliffs thought to be swarming with snakes, according to the Associated Press (AP).

Tiba went because wild boars had been raiding her corn and she wanted to stop them, according to the South China Morning Post. But it was there that the 23-foot-long (7 meters) python attacked and swallowed her whole.

Her family and others villagers went looking for her on Friday (June 15) but found just her belongings, including her sandals and machete, the village chief, Faris (who goes by a single name), told the AP. About 165 feet (50 m) from these belongings, the search party found a snake with a bloated body. They promptly killed the snake and carried it back to the village.

"When they cut open the snake's belly, they found Tiba's body still intact with all her clothes," Faris told the AP. "She was swallowed first from her head."

If the search party hadn't found the python that ate her, there would have been little evidence of the attack, said Penning, who wasn't involved with the woman's case. It's possible that the snake could have passed her clothes (depending on what they were made of), but snakes can digest an entire body, even bone, he said.

"Snakes have very unique digestive systems, which can expand a lot of energy to increase their digestive capacity," Penning said. "They digest everything."

Reticulated pythons hunt by picking an area that smells like their prey, Penning said. Then, the ambush hunters wait for prey to come by, before striking with their curved teeth and wrapping their strong bodies around the victim, which can lead to cardiac arrest and death. (Contrary to popular belief, pythons don't suffocate prey to death, Live Science previously reported.)

However, the next part, swallowing the prey whole, is easier with the snake's typical prey — including rodents, deer, wild pigs and even monkeys — than with humans, said Brad Moon, a professor of biology at the University of Louisiana at Lafayette. That's because it's easy for a snake to expand its jaws to swallow an animal that's small or that gradually increases in size from head to rump. In contrast, a human's square-shaped shoulders are "probably hard for a snake to get their mouth around," Moon told Live Science.

Given this shoulder impediment, as well as the substantial size of some humans, pythons generally don't attack people. But if the person is small and the python is big — perhaps more than 20 feet (6 m) long —it's possible that a python could first kill and then eat a person, Moon said.

Moon noted that there are invasive Burmese pythons (Python bivittatus) that have become established in Florida over the past few decades, but these snakes are usually smaller than reticulated pythons (Python reticulatus). "Burmese pythons have been measured up to 19 feet [5.8 m] long, although individuals over about 15 feet [4.6 m] are rare," Moon said.

But even though Burmese pythons aren't as large, it's still important to take precautions while trekking in python territory — for instance, by keeping an eye on small pets and children, as well as watching where you step, Moon said. After all, this is Indonesia's second python attack in just over a year; last March, a python swallowed a 25-year-old man in West Sulawesi province, the AP reported.