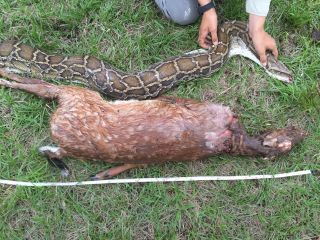 A Burmese python captured in Florida weighed less than the deer it tried to devour.
(Image: © Conservancy of Southwest Florida)

Oh, deer. A hungry Burmese python in Florida gulped down a white-tailed deer that proved to be a little more than the snake could handle — the hapless prey weighed more than its predator.

Biologists with the Conservancy of Southwest Florida (CSF) found the 11-foot-long (3 meters) python in Collier-Seminole State Park in April 2015; the snake was already distended by its recent meal — a young deer — but lost its lunch soon after it was captured and moved to an open area, CSF representatives reported in a statement.

The regurgitated fawn tipped the scale at 35 lbs. (16 kilograms), while the python weighed only about 32 lbs. (14 kg), making this the largest prey-to-predator weight ratio ever documented for Burmese pythons, and perhaps for any python species, according to the CSF. [Photos: Giant Pythons Invade Everglades]

A necropsy of the fawn revealed wounds on its neck from the snake's teeth, along with fractures in the prey's spine and ribs. Its coat was patterned with spots; the deer was young enough to still be nursing, as there was evidence of curdled milk in its stomach, according to the CSF.

The fawn's head was already partly digested, hinting that the snake might have eventually been able to digest the whole deer, CSF biologist Ian Bartoszek told reporters at a local press event streamed on Facebook.

"We were trying to process that an animal this size could get its head around what turned out to be a deer," Bartoszek said. In photos of the regurgitation-in-progress, the body of the deer extrudes from the snake's maw, which gapes impossibly wide to accommodate the fawn's body.

"This is the same way it would've gone in," Bartoszek explained. "That is not cut open — that is the actual skin of the mouth. That's how wide the animal had to get to swallow that prey item."

Burmese pythons (Python bivittatus), which are among the largest snakes in the world, are native to Southeast Asia and are an invasive species in Florida. Populations likely became established after pet snakes were released or escaped into the Everglades, according to the Florida Fish and Wildlife Conservation Commission (FWC).

One of the biggest Burmese pythons found in Florida measured 17 feet (5 m) long and was captured in the Everglades in December 2017. Because these pythons can grow to be so large, they have few natural predators, and they have been found to feed on a range of native birds, mammals and reptiles — some of which are endangered or threatened, the FWC reported.

Previously, another voracious Burmese python was found in the Everglades with three deer in its gut — two fawns and a doe — which were almost entirely digested when the snake was captured and euthanized. However, the python likely didn't gulp all the deer down at once; rather, the predator probably consumed them over a 90-day period, Live Science reported in 2016.

Discovering a python that can swallow an animal larger than the snake itself is "another important piece of evidence for the negative impact invasive Burmese pythons are having on native wildlife across the greater Everglades ecosystem," Bartoszek said.

But reining in the booming snake populations will take more than just observation. Efforts are underway to extract invasive pythons from vulnerable ecosystems, and as of February 2018, hundreds of snakes collectively weighing more than 10,000 lbs. (4,536 kg) have already been removed from parts of southwest Florida, CSF representatives reported in the statement.

Meanwhile, researchers are creating databases of the snakes' behaviors and movements, to help biologists better understand the pythons' impacts on wildlife and further develop strategies for controlling the snakes' populations, according to the CSF.

The findings were published in the March 2018 issue of the journal Herpetological Review.