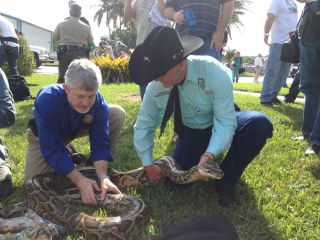 The Burmese python has worn out its welcome, and its time is nigh.

For the second time since 2013, Florida wildlife officials are inviting people near and far to search for Burmese pythons (Python bivittatus) in the Everglades. Depending on where they spot the invasive species, participants can either capture or kill the snakes, which are generally about 6 feet (almost 2 meters) in length, said Carli Segelson, a spokeswoman for the Florida Fish and Wildlife Conservation Commission (FWC).

However, the snakes' brownish markings make them well camouflaged. So far, 1,035 volunteers have caught 95 snakes — more than the 68 snakes caught by 1,600 participants in 2013, Segelson said. [Photos: Burmese Pythons Invade the Florida Everglades]

The 2016 challenge, which started Jan. 16 and ends Feb. 14, is the state's way of controlling the pythons' population. "It's not good for the ecosystem and the native wildlife to have an invasive species living in the area," Segelson told Live Science.

Either way, the pythons have prospered in the Everglades' hot, humid summers and mild winters. They're also eating the native birds, mammals, fish and reptiles, Segelson said. There are some reports of alligators eating the pythons (and vice versa), but other than that, the Python Challenge seems to be the only major way to get rid of them.Experts aren't sure how the pythons got established in the Everglades, but they have two ideas. Perhaps pet owners set captive snakes free into the wild, Segelson said. Or, maybe the snakes escaped from captivity during Hurricane Andrew in 1992, she said.

Volunteers can brush up on their python-finding and safety skills at PythonChallenge.org, which has videos and tips for capturing the snakes. On average, it takes more than 15 hours to spot a python, but participants might have more luck if they look in marshes, pine rocklands, canal banks and open areas, according to the site. Moreover, the challenge is held in the winter, when snakes spend more time basking in the sun (especially on levees or tree islands) due to the cooler weather.

Volunteers can kill snakes in certain areas, but some regions require that they capture the snakes live and bring them in to be euthanized. In these instances, volunteers can put snakes in breathable bags — such as cotton pillowcases — and then put the bag in a heavy-duty, ventilated container labeled "dangerous reptiles," before handing them over to officials.

People can still register for the Python Challenge, which only officially ends on Valentine's Day — if people see an invasive plant or animal in the wilds of Florida, they can call 1-888-IVE-GOT-1 (1-888-483-4681) or download the app. They can also join the Python Patrol to help capture the snakes year-round.

Who knows, maybe the next volunteer will break the record, Segelson said. Right now, the longest wild python caught in Florida measured 18 feet long (5.5 m), Segelson said, but they are known to grow to be up to 26 feet long (8 m) in their native home on the Malay Peninsula in Southeast Asia.