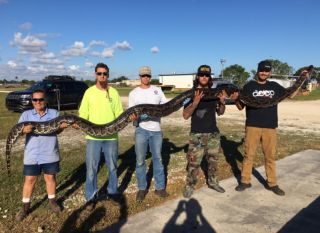 A snake hunter caught a 17-foot-1-inch-long (5 meters) Burmese python near the Big Cypres National Preserve in the Everglades on Dec. 1, breaking the record for the largest python captured as part of the South Florida Water Management District's python-elimination program.

But although the slithering beast was a giant — it weighed in at 133 lbs. (60 kilograms) — that's still small for this invasive species in the Sunshine State, experts say.

The Burmese python (Python bivittatus) can grow to be over 20 feet (6 m), though no individuals of that size have been found in the Everglades.

David Penning — a biologist at Missouri Southern State University who studies snakes, particularly how they move and hunt — suspects that the record-breaking python is likely just one of many hiding and feasting on wildlife in the Everglades. [Photos: Giant Pythons Invade Everglades]

This has been a problem for the area, as the snakes are unchecked in an ecosystem that's not made to sustain them.

For example, in controlled experiments, researchers have released snakes into a confined area, and the people who are charged with retrieving them might find only 5 percent of those reptiles, Penning said.

"As large as they are, think about what a snake is and what it can do," Penning said. "A raccoon is always going to look like a raccoon, but a snake can be curled up in a ball; it can be up in a tree. You could be standing next to a large snake, but if it's standing still in a grassy area, you could never know it's there."

Because spotting large snakes is so difficult, Penning thinks that the South Florida Water Management District, the government agency that's leading the efforts to remove pythons from the Everglades, will have a hard time doing so. However, he agrees that the Burmese pythons, which are a problem-causing invasive species, don't belong there.

"The Everglades is a beautiful buffet for an apex predator like that," Penning said. "Since the snakes have shown up and increased in number, we have seen a prominent drop in basically every animal that can be consumed by those snakes."

Because Burmese pythons are not native to the Everglades, their prey hasn't evolved alongside them. Evolution is often a slow-moving process, so animals native to the area haven’t developed mechanisms to hide or protect themselves from Burmese pythons, and some may not even recognize the snakes as a source of danger, according to Penning. [Florida Everglades Photos: Follow the 'River of Grass']

"It seems so obvious, but if you don't know what it is, how do you know it's dangerous?" Penning said.

In the meantime, there are no other animals in the food web that can prey on or compete with the Burmese python, leaving the snake relatively unchecked in an environment that's not set up to control their population.

"The pythons have essentially eliminated all the fur-bearing animals in the Everglades, and, with no predators, continue to flourish and possibly expand their presence," Randy Smith, spokesperson for the SFWMD, told Live Science in an email. To date, "the program is nearing the elimination of nearly 800 snakes, many of which are multi-egg-bearing females that have successful birth rates of 50-70 snakes each," he added.

And the free buffet also explains how the python got so big, Penning said. Reptiles have what's called indeterminate growth, meaning they continue to grow throughout their lives, as long as they have enough food. Penning said he has no idea how old the python that was captured in the Everglades is, other than that it's an adult, because python size is correlated with diet instead of age.

When it comes to removing Burmese pythons from the Everglades, Penning thinks the local government is on the right track because it limits who can go in to look for them. For example, the district only allows hunters who can correctly distinguish between Burmese pythons and native snake species such as the various rattlesnakes that live in the Everglades. This limits how many pairs of boots are tromping through the preserved habitat.

According to the Smith, the pythons are retrieved and humanely euthanized.

The unfortunate part is, "it's not the snake's fault," Penning said. "That's the pill that's hard to swallow as someone who likes snakes."