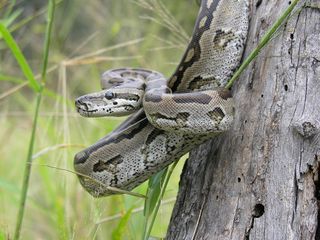 Southern African pythons' coils can crush the life out of their prey, but they also gently warm their brood of babies.
(Image: © Graham Alexander/Wits University)

Snakes get a bad rap — stories from the Bible to "Harry Potter" paint serpents as deceitful, unfeeling or downright evil. But perhaps that's only because we don't know them well enough; as it turns out, snakes can be caring and attentive mothers.

A new study recently described how southern African pythons care for their young, offering the first evidence of maternal care in an egg-laying snake species. The mother python's muscular body — which can crush the life out of large mammal prey — coils gently around her babies in the nest, protecting them and keeping them warm at night as they grow.

But her attentiveness comes at a cost. As female pythons typically don't eat during their breeding season, which lasts about six months, they lose approximately 40 percent of their body mass while looking after their eggs and then caring for a tangled pile of babies. The moms were "in poor condition" after this period, the study author reported. [Python Facts]

Herpetologist Graham Alexander, sole author of the study and a lecturer in the zoology department at the University of the Witwatersrand in Johannesburg, spent seven years radio-tracking and studying 37 free-ranging southern African pythons (Python natalensis) in South Africa's Dinokeng Game Reserve.

During that time, eight of Alexander's snake subjects laid clutches of eggs in subterranean burrows. He observed and recorded their behavior using infrared cameras that he'd lowered underground.

After the eggs hatched, the python mothers stayed with their young for two weeks. The mothers' bodies darkened from their normal light-brown patterns to nearly solid black as they brooded, an adaptation that likely helps them to warm themselves in the sun and then pass that extra heat to their young, according to the study. The pythons would bask near the burrow entrance until their body temperature climbed to nearly 104 degrees Fahrenheit (40 degrees Celsius), just a few degrees away from temperatures that could kill them, Alexander said in a statement.

And these devoted python mothers aren't alone; ongoing research is revealing attentive mothers in other snake species too, Alexander said.

"Biologists are discovering that females of many types of rattlesnakes show maternal care of babies. In some species, mothers appear to even cooperate by taking shifts to look after young," he said.

However, those rattlesnake species give birth to live babies. For now, the southern African python is the only known egg-layer to demonstrate a maternal side. Snakes have typically been written off as indifferent parents, but perhaps that's only because there is still much to be learned about their habits, Alexander suggested.

"Research is showing that snake reproductive biology is far more complex and sophisticated than we previously thought, and there is a range of behaviors that have been recorded in several species that can be classed as maternal care," he said.

The findings were published online March 8 in the Journal of Zoology.