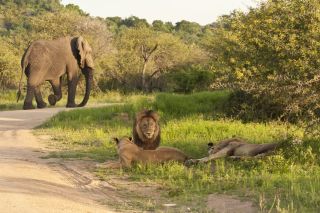 Elephants in Kruger National Park killed a rhino poacher, whose body was then eaten by lions, on April 2, 2019. Here, an image of an elephant walking behind a pride of lions in the national park in South Africa.
(Image: © Shutterstock)

The story has emerged as something of a feel-good tale on social media, even as conservationists warn against viewing poaching in simplistic terms.

"This is always disappointing to see," tweeted Sabah Ibrahim, a naturalist and environmental educator. "The demand for rhino horn comes from extremely wealthy consumers who almost never face any form of justice, and the poachers themselves are more often than not desperate people existing in crushing post-colonial poverty." [In Photos: The Last 5 Northern White Rhinos]

The news originated with a press release from Kruger National Park. Officials there report that they were contacted by the family of a man who said that their relative's body had been left in the park. The man was allegedly with at least four others who were hunting rhinoceroses when he was killed by an elephant on Tuesday, April 2.

Park rangers searched for the body on foot and in an aircraft, but they weren't able to find it until Thursday morning, after they arrested the other alleged poachers and found out from them where they had left the body. By that time, park officials said, lions had scavenged the man's corpse, leaving behind only his skull and a pair of pants.

But many conservationists were troubled by the rhetoric. "Did the death of this poacher cause even the tiniest iota of reduction in the demand for rhino horn?" Ibrahim tweeted. "Did the person at the other end of the transaction suffer at all? No. So there's no 'karma.'"

Poaching is a tragic problem in Kruger National Park and elsewhere. In 2017, a white rhinoceros was killed, even while it was in a zoo in France, highlighting the risks poachers are willing to take to get rhinoceros horn. Although the horn is just keratin, the same material that makes up nails and hair, it is valued in traditional Eastern medicine and often bought as a status symbol.

Even as rhinoceros numbers dwindle, poaching has skyrocketed over the past decade. A 2016 report by conservation group Save the Rhino found that the rarity of rhino horns was part of the appeal among Chinese consumers, particularly those who saw the horns as a luxury good. An international report released in 2017 found that 1,342 rhinoceroses in Africa were poached in 2015, compared with only 60 in 2002. And, since Kruger National Park is home to Africa's largest rhino population, it has suffered the most severe rhino poaching of any area, that report noted.

The largest importer of rhino horn, at least as measured by seizures by law enforcement, was Vietnam, that report found. China and Hong Kong followed. The international black market that supplies these horns relies on hunters willing to risk their lives in Africa for far less money than the horns will eventually secure, once sold. (This is not the first time that lions have eaten a poacher.)

"Entering Kruger National Park illegally and on foot is not wise; it holds many dangers and this incident is evidence of that," Kruger managing executive Glenn Phillips said in a statement. "It is very sad to see the daughters of the [deceased] mourning the loss of their father, and worse still, only being able to recover very little of his remains."