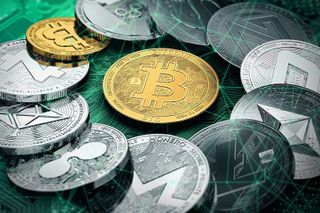 There are thousands of different cryptocurrencies, many of which rely on a network that keeps track of how much money each user has.
(Image: © Shutterstock)

Money can be confusing. Nevermind the mathematics of personal finance, the very concept that paper, metal and digital money have specific value agreed upon in society is complicated. So, it's no surprise then that one digital type of money called cryptocurrency (from the Greek word "crypto," meaning "hidden" or "secret,") can be even more difficult to wrap your head around.

Cryptocurrencies have roots at the fringes of society. They've infamously been sought as ransom payment or used to make illegal purchases because transactions aren't traceable by conventional means.

Now, cryptocurrencies are more mainstream than ever before. Sky-high values and astonishing price drops have attracted media attention and speculative investors. In February 2019, financial giant JPMorgan Chase issued its own cryptocurrency — a first among traditional financial institutions.

Cryptocurrencies are "non-governmental digital assets that are widely tradeable," said James Angel, an associate professor at Georgetown University in Washington D.C., who studies financial technology. Since Bitcoin — perhaps the best known type of cryptocurrency — was first suggested in 2008, many variations have emerged. There are now thousands of cryptocurrencies.

Put it on the blockchain

Many cryptocurrencies use blockchain technology. The idea behind blockchain is to keep a "distributed ledger," sort of like a database of information that multiple parties have independent access to and must agree upon to make any changes. No one user is able to alter information on a blockchain ledger without permission from everyone else involved in a transaction, and a clear record of their actions. This means that a blockchain could prevent hacking attempts that rewrite ledgers or transfer funds without a log of changes.

Blockchain has been hyped as a security revolution, but in some ways it simply shifts the vulnerabilities of sensitive information. For example, a customer might not trust that their bank can keep their account balance protected, but if the customer loses their ATM card or online passwords, the bank will allow the customer to regain access to their money. On the other hand, a cryptocurrency that incorporates a blockchain puts more responsibility of security on the customer, so that a stolen or lost password could mean losing access to their funds forever.

Not all cryptocurrencies are intended to be used in the same way as traditional currencies. There are three main categories of cryptocurrency, according to Angel:

Utility tokens can be redeemed for services (or "utilities"), for example, on a network run by Ethereum, an open-source computing platform and operating system that has its own cryptocurrency. These services could be anything from online games and gambling, to marriage licenses.

Right now, one key offering from utility tokens is facilitating something called a smart contract. These are agreements in computer code that use a blockchain to automate the normal time-consuming communication between multiple parties. The utility tokens work like arcade tokens that can be used for a variety of games, so long as they're in the same arcade. That is, a variety of services may be provided by the same company that issues the utility token.

Smart contracts can also be used independently of cryptocurrencies. For example, in the state of Ohio, legislation was introduced to allow the use of smart contracts to register a car title. A smart contract could automatically coordinate agreements between a buyer, a car dealership, a bank and an insurance company.

These types of contracts could streamline everyday transactions, but we might not even notice when they've been introduced. "It's probably going to be invisible to you in a lot of ways," Angel said, because a smart contract could replace much of the administrative work that goes on behind the scenes, while keeping roughly the same terms in place.

There are also payment tokens, like Bitcoin, which most closely resemble familiar forms of money, and can be exchanged for goods with anyone who will accept them as payment. Bitcoin is now accepted at some major online stores, such as the tech retailer Newegg, but it's far from being universally accepted. "I don't think any of us are going to walk into a fast food restaurant any time soon and buy a burger with Bitcoin," Angel said.

And then there are security tokens. Rather than conferring some tangible utility, these tokens are used to certify ownership of something, similar to owning stock in a company. The classification of any cryptocurrency, which may be disputed, makes a difference in how it will be regulated. The U.S. Securities and Exchange Commission has declared its intent to treat most cryptocurrencies similarly to public stock, particularly in instances where the coin isn't exchanged for goods or services, but serves as a financial interest in an enterprise.

So, is cryptocurrency worth it?

An enormous amount of electricity use is built into the design of cryptocurrency, especially Bitcoin. Combined with its popularity, this has led to scrutiny of Bitcoin's energy consumption.

Rather than have a centralized set of computers that process transactions, users handle the daily operations of the Bitcoin economy. That involves user-owned computers running software that helps perform blockchain transactions. To incentivize users, the software also attempts to solve a mathematical puzzle through brute force — by guessing and checking one solution after another. When a solution is found, the lucky user is rewarded with Bitcoin. These users are called miners, and the process of running energy-consuming computers to earn coins is called mining. Although not all bitcoin users need to mine for Bitcoin, mining is essential to Bitcoin transactions.

It's been estimated that Bitcoin miners globally use electricity on the scale of entire countries like Ireland or Austria. "The environmental impact of Bitcoin in its current form is just totally unacceptable," Angel said. [Top 10 Emerging Environmental Technologies]

Not only is the environmental impact concerning, but cryptocurrencies are also "very volatile, [and] there are a lot of scams out there," Angel said. "No one knows what they're really worth."

With so much uncertainty swirling around cryptocurrencies, even the ones whose creators seem to have good intentions, what's a potential investor to do?

"I'd say the average person should just say no," Angel said.