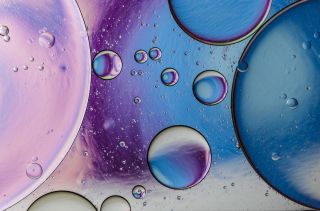 A team of British physicists and mathematicians used a supercomputer to uncover the hidden truth of how water droplets merge and stick together.

If you've ever watched water droplets touch and merge, you might have imagined two little balls of water getting closer and closer together, until their surfaces overlapped and surface tension pulled the distinct balls together into a single, rough whole. That's what's visible to the naked eye. But a new simulation using a supercomputer, published March 13 in the journal Physical Review Letters, paints a much more complicated picture.

The simulation modeled two equally sized droplets of pure water in space, down to the level of individual water molecules. As the droplets got closer together, the scientists showed, tiny, ultrafast waves formed on the surfaces of these droplets. The random motions of the water molecules, called "thermal fluctuations," made the individual molecules jump and dance toward one another as they neared. [Liquid Sculptures: Dazzling Photographs of Falling Water]

Researchers call this surface rippling effect, which results from the thermal fluctuations of the molecules, "thermal capillary waves." The ripples are too small and fast in this case for any natural experiment to spot. But the simulation showed that the teensy waves reach out to one another, forming the leading edge of the nearing water droplets. The surface tension of the droplets (the cohesive force that keeps the droplets in their "droplet" shape) suppresses the waves, but they're still present, and still form the leading edge of the droplets as they near one another.

Eventually, the researchers found, the waves touch, forming bridges between the droplets. And once a single bridge has formed, surface tension gets to work, sealing more ripples together "like the zip on a jacket," as the researchers said in a statement.

The researchers simulated about 5 million water molecules, forming two drops about 0.16 inches (4 millimeters) wide. The whole merging is over in a few nanoseconds at that scale — too fast for any human camera to catch, they wrote.

Though they simulated two droplets floating in space, a similar effect is likely at work when two droplets merge on a flat surface, they wrote. Understanding this behavior is important, they wrote, because it could help explain the behavior of water inside clouds and inside machines designed to condense water out of the air.