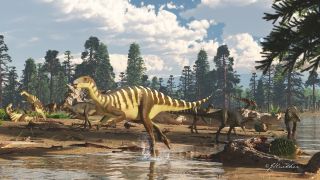 A small, agile dinosaur with powerful hind legs roamed the ancient rift valley between Australia and Antarctica during the Cretaceous period.

The scientists named the species Galleonosaurus dorisae, after both the galleon and paleontologist Doris Seegets-Villiers, who received her doctorate while working in the area. Analysis of the bones showed that the newfound dinosaur was an ornithopod, a group of plant-eating dinosaurs that had bird-like feet and walked on their hind legs. [Images: These Downy Dinosaurs Sported Feathers]

"These small dinosaurs would have been agile runners on their powerful hind legs," lead study author Matthew Herne, a postdoctoral fellow at the University of New England, said in a statement.

The bones were buried in volcanic sediments that were likely carried in by rivers that flowed from an eastern volcanic range active during the Cretaceous period. "The sediments washed by rivers into the rift valley created a forested river floodplain upon which dinosaurs such as Galleonosaurus and many other types of dinosaurs and other animals flourished," Herne told Live Science.

They also found that this newfound species was more closely related to ornithopods from Patagonia than those from say North America and China, Herne said. "We are steadily building a picture of terrestrial dinosaur interchange between the shifting Gondwanan continents of Australia, South America and Antarctica during the Cretaceous period," Herne said. At the time, the supercontinent Gondwana was shifting and Australia and Antarctica were spreading apart (forming an ancient rift valley that eventually filled with water to form the Southern Ocean).

The new finding suggests, "land connections (land bridges) between Australia and South America, via Antarctica, must have been available to dinosaur groups at times during the Cretaceous that resulted in closer genetic links between the dinosaurs on these continents than between these dinosaurs and those in other places," he wrote in an email to Live Science.

The G. dorisae fossils were discovered a decade or so ago by volunteers with the Dinosaur Dreaming project — directed by paleontologists of Museums Victoria and Monash University — who were excavating near the towns of Inverloch and Wonthaggi, according to the statement. But it wasn't until recently that the scientists studied and described the species.

Galleonosaurus is the fifth ornithopod genus (the classification right above species) identified from Victoria, which "confirms" that these small-bodied dinosaurs were very diverse and thrived in the rift valley that spanned Australia and Antarctica, Herne said.

The researchers reported their findings today (March 11) in the Journal of Paleontology.