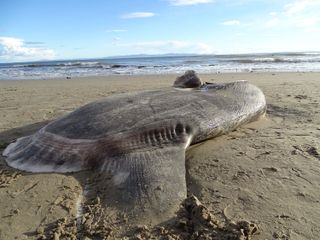 This hoodwinker sunfish (Mola tecta), a species never before seen in the Northern Hemisphere, washed up in California.
(Image: © Thomas Turner/UC Santa Barbara)

A fish so mysterious that scientists named it the "hoodwinker" because it had eluded them for decades has washed ashore in California, thousands of miles from its home in the Southern Hemisphere.

And this isn't just any fish. At 7 feet (2.1 meters) long, this particular hoodwinker sunfish is larger than a four-person hot tub. The species is also the heaviest bony fish in the world.

So, researchers were surprised when they found a dead hoodwinker on Sands Beach in Santa Barbara County on Feb. 19, so far away from the fish's native swimming grounds in southeastern Australia, New Zealand, South Africa and perhaps Chile. [In Photos: The World's Largest Bony Fish]

Because the hoodwinker sunfish is so rarely found, it took researchers a few days to identify the creature. In fact, little is known about the beast. Although research on sunfish (fish in the Mola genus) has gone on for decades, scientists formally named the newfound bony fish only in 2017, after a dead one washed ashore near Christchurch, New Zealand, Live Science previously reported.

The scientists in 2017 called the species Mola tecta, the Latin name for "hidden."

It's anyone's guess how the newly discovered Mola tecta ended up on a California beach, but it's the first time this giant has been seen in the Northern Hemisphere, said researchers at the University of California, Santa Barbara.

After the fish's body was found on U.C. Santa Barbara's Coal Oil Point Reserve (where that beach is located), researchers sprang into action. At first, they mistakenly thought it was a common mola, an ocean sunfish that lives in the Santa Barbara Channel, they reported in a Facebook post, saying, "Holy Mola mola. This 7-foot-long Mola mola, also known as ocean sunfish, washed up on the beach just east of the reserve this afternoon due to unknown cause. It is even taller (fin tip to fin tip) than it is long! This unique-looking species is the heaviest bony fish in the world."

Upon seeing the Facebook post, Thomas Turner, an associate professor in UC Santa Barbara's Ecology, Evolution and Marine Biology department, rushed over to the beach to get photos of his own. He posted his shots on iNaturalist, an online community where scientists can crowdsource species identification.

Turner's post caught the attention of scientists the world over, including Marianne Nyegaard, a doctoral student at the Murdoch University School of Veterinary and Life Sciences in Australia, who discovered and described the hoodwinker in 2017, and Ralph Foster, the collection manager of ichthyology (the study of fish) at the South Australian Museum.

Both suspected the ocean sunfish was actually the hoodwinker, but they needed more information to be sure, they told The Current, a UC Santa Barbara news publication.

"I thought that the fish surely looked an awful lot like a hoodwinker, but frustratingly, none of the many photos showed the clavus (a diagnostic feature) clearly," Nyegaard told The Current, referring to a rudder-like structure behind the tail. "And with a fish so far out of range, I was extremely reluctant to call it a hoodwinker without clear and unambiguous evidence of its identity."

According to that 2017 paper, unlike other Mola species, the hoodwinker doesn't have a protruding snout, nor does it develop a head or chin bump. Additionally, its clavus has a rounded margin and is separated into upper and lower parts, the researchers reported.

To help with the identification, the UC Santa Barbara scientists scoured the beach until they found the Mola's body again. Then, they took pictures of specific features on the fish and even lopped off a piece of fin tissue for DNA identification. [Photos: The Freakiest-Looking Fish]

Once Nyegaard got the new evidence, "I literally, nearly fell off my chair (which I was already sitting on the edge of!)," she told The Current.

To celebrate, the scientists updated the Facebook page, saying, "Update on the mystery of the Mola ... This specimen has been positively identified as Mola tecta, the hoodwinker sunfish! This is an amazing find because it is the first record of this species observed in the Northern Hemisphere."

They added, "An incredible example of the amazing discoveries that can be made through collaboration — great work, team!"