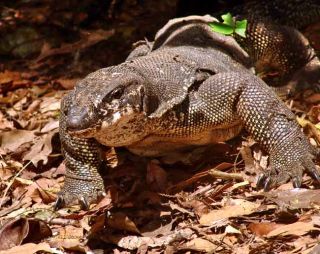 Monitor lizards are giant, colorful creatures that would seem to stick out like sore thumbs, but scientists are still identifying new species.

Monitor lizards — close relatives of the Komodo dragons — are the world's largest living lizards. The new species illustrate how water monitor lizard diversity has been underestimated in the Philippines, the study suggests.

"Monitor lizards are fantastic creatures. They are agile, powerful, and the most intelligent lizards of the world," said study co-author Maren Gaulke of the GeoBio-Center LMU in Munich, Germany.

One of the new species, Varanus rasmusseni, was identified based on only two specimens housed at the Zoological Museum of Copenhagen in Denmark. V. rasmusseni juveniles are distinguished by a unique pattern of small, tiny bright dots on their backs, said the study's lead author Andre Koch of the University of Bonn in Germany.

The other new species was named V. palawanensis and displays white, irregularly shaped splotches on its head, and the new subspecies, V. cumingi samarensis has a much darker color pattern than its bright yellow relatives, Koch told LiveScience.

The new classification follows other recent discoveries of monitor lizards from the Indonesian island of Sulawesi and from the Philippines.

Details of the newly discovered lizards are reported in the May 6 edition of the journal Zootaxa.