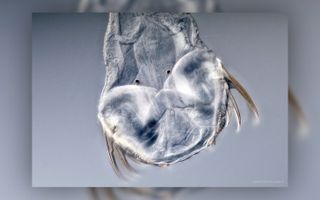 A microscopic worm that lived about 505 million years ago was a "patchwork" species with body parts that matched up to different worm families, confounding experts who tried to classify the tiny creature.

As if this worm weren't weird enough already, scientists recently discovered that it sports a set of hidden jaws that had gone undetected for more than 100 years.

However, rather than adding to the conundrum, these secret structures may have solved the century-old puzzle of where the worm belongs on the tree of life — between two ancient worm lineages that are still around today, scientists reported in a new study. [Cambrian Creatures Gallery: Photos of Primitive Sea Life]

Amiskwia sagittiformis had an elongated, flat and soft body measuring less than 2 inches (5 centimeters) long; it had a rounded head tipped with two sensory tentacles, flaps extending along its sides and a paddle-like tail. Its genus name, Amiskwia, comes from the Cree word "beavertail." Sagittiformis means "arrow shape" in Latin, inspired by the worm's overall body plan, according to the Royal Ontario Museum in Canada.

Amiskwia, which was described in 1911, somewhat resembled its cousins in the arrow worm group, but it lacked some of their distinctive features, such as spines near the head that are used for grasping prey, lead study author Jakob Vinther, a senior lecturer with the School of Earth Sciences at the University of Bristol in the United Kingdom, told Live Science in an email.

The worm also shared some features with swimming ribbon worms — but again, it lacked certain other structures that are common in that group, Vinther explained.

For decades, scientists have argued over where Amiskwia belongs: Should it be grouped with arrow worms, with ribbon worms or perhaps placed on its own branch of the worm family tree, representing a body plan that went extinct millions of years ago?

When the researchers examined fossils of the worm, they tried a technique that hadn't been used before: coating the fossils with ammonium chloride. The chemical made internal structures stand out, and the scientists were able to discern "distinct robust elements in its head," according to Vinther.

"It looked like a pair of jaws to me, and no other person had seen that before," he said.

Worms known as gnathiferans have jaws like the ones the study authors saw in Amiskwia, Vinther explained. Since Amiskwia had a body like an arrow worm and jaws like a gnathiferan, the researchers suggest that arrow worms and gnathiferans are more closely related than once thought. In fact, arrow worms' signature grasping spines could have evolved from Amiskwia's jaw structures, which probably helped the worm gobble up zooplankton and small crustaceans, Vinther said.

During the Cambrian period, about 543 million to 490 million years ago, animal life diversified at an astounding rate. As a result, plenty of strange-looking creatures thrived alongside Amiskwia, such as an eyeless worm that resembled a kitchen brush; a segmented, many-limbed, wormlike animal called a lobopod; and a fierce predatory "smiling worm" with multiple legs and spines studding its back.

However, many of these so-called weird wonders that lived hundreds of millions of years ago weren't that different from their modern-day descendants, Vinther said. In fact, many types of the microscopic worms that are around today retain very similar anatomy to ancient and bizarre ancestors like Amiskwia, he added.

The findings were published online Feb. 21 in the journal Current Biology.