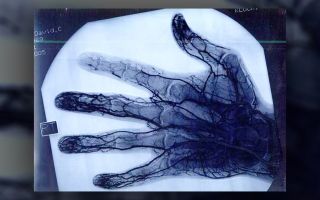 As seen in this angiogram, blood flow to a yo-yo performer's index finger was severely constricted, causing the finger to feel cold and turn purple.
(Image: © Courtesy of Dave Schulte, aka Dazzling Dave)

A striking X-ray image shows the dark threads of arteries and veins carrying blood from wrist to fingertip — except in the index finger, which glows with a ghostly white hue.

The image is an angiogram — a type of medical imaging technique that reveals veins and arteries after they have been flooded with a special dye. If blood is flowing properly, it carries the dye through the branching networks of blood vessels, which show up as dark lines in the image.

The angiogram — which was taken back in 2005 but recently resurfaced on social media — revealed a lack of blood flow in the right index finger of David Schulte, aka Dazzling Dave, a profession yo-yo performer.

So, what led to that unusual image? At the beginning of 2005, Schulte sustained the injury while in North Dakota. He was performing demonstrations and giving lessons at schools, which called for near-constant yo-yo-ing for 8 to 12 hours at a stretch, he told Live Science.

He noticed that when his hands got cold, his index finger on his right hand started feeling cold sooner and took longer to warm up than his other fingers did. About a week after he returned to his home in Minnesota, the same finger started turning unusual colors — red, blue and dark purple — prompting Schulte to seek medical attention.

His doctor recommended an angiogram, "and then I got that really cool, interesting picture and it showed no blood getting past the second knuckle of the index finger," Schulte said. The diagnosis was not a blood clot, as his doctor first suspected. It was a vasospasm, a sudden constriction of the blood vessels, likely in response to Schulte's yo-yo repeatedly rebounding and hitting that finger for the past seven to 10 years, he wrote in a blog post that he published at the time.

"The hand specialist said, 'Show me how you do yo-yo tricks,' and I showed him one of my most-used tricks, which is a really hard, straight throw down," Schulte said. "And he said, 'Oh yeah, that could cause it.'"

The doctor prescribed blood thinners, which Schulte took for a month; his finger went back to its normal color, Schulte said.

This type of condition — when blood stops flowing to extremities due to constricted blood vessels — is called Raynaud's syndrome, or simply Raynaud's, according to the National Heart, Lung and Blood Institute.

It's normal for blood vessels to constrict in the cold. But for people who have Raynaud's, the blood vessels clamp down too hard, constrict for too long and take longer than normal to relax. The result is that the affected extremities stay colder for longer and may change color, Dr. Elizabeth Ratchford, director of the Johns Hopkins Center for Vascular Medicine and an associate professor of medicine at the Johns Hopkins University School of Medicine in Maryland, told Live Science. Ratchford was not involved with Schulte's case.

There are two types of Raynaud's: primary and secondary. Primary Raynaud's has no known cause, and secondary Raynaud's appears due to other circumstances, such as disease or an injury. For example, secondary Raynaud's may be the result of a medical condition, such as lupus, or could manifest as a side effect of certain medications, including beta blockers, Ratchford said. Smoking cigarettes can also raise the risk of developing Raynaud's.

Other risks include exposure to repetitive actions over time — such as using vibrating power tools like jackhammers or, in Schulte's case, yo-yo-ing — can also lead to Raynaud's, though what happened to Schulte is highly unusual, Ratchford told Live Science.

Luckily for Schulte, he suffered no lasting damage from his Raynaud's, and his yo-yo technique is pretty much the same as it was before — except when he performs outdoors in the extreme cold. During his winter shows, if outside, Schulte tends not to throw the yo-yo quite as hard as he would on a warm day, he said.

"It's such a fluke injury," Schulte said. "I literally don't know of any other yo-yo player who got it besides me."