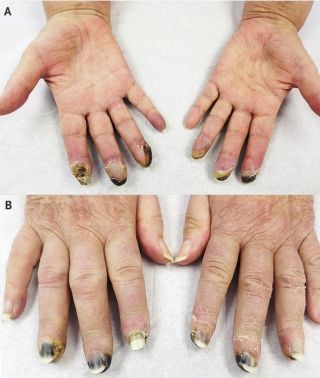 Black, necrotic tissue formed on the fingertips due to reduced blood flow.
(Image: © The New England Journal of Medicine ©2014)

A woman's "dying" fingertips — which had turned black and scaly, and were covered in dead tissue — were saved when she had surgery on the nerves along her spine, according to a new case report.

This kind of nerve operation had not been used previously to treat her condition, the doctors who treated her said. The surgery saved her fingertips, and she has since recovered, they said.

The 69-year-old woman's fingertips had become progressively black over a few months because of low blood flow in her hands, and blood-pressure treatments weren't successful in mitigating the problem. If the condition were to have progressed, doctors may have had to amputate her fingers.

"She had Raynaud's phenomenon, which is where the ends of your fingers become very pale in cold weather," said Jacob Rosenberg, a medical student at Stanford University, who wrote the report. "For this patient, things got worse and worse, to the point where her circulation was poor enough — so she started to get what's essentially gangrene." [The 9 Most Bizarre Medical Conditions]

To find the underlying problem that was blocking blood flow to the woman's fingers, doctors carried out several tests. They found that the patient had a condition called cryoglobulinemia, in which her body made too much of a particular antibody, according to the report, published today (March 19) in the New England Journal of Medicine.

"In cooler temperatures, those antibodies clump up to form a clot," Rosenberg said. "It's easier for the circulation to get clogged up, particularly in the fingertips, where the temperature is lower than the core of the body, and there are really small arteries."

Doctors tried administering chemotherapy to stop the immune cells from producing abnormal antibodies, but the patient didn't get better. To avoid amputating the fingers, doctors decided to make the body send more blood to the hands, by performing a surgery called sympathectomy, in which some of the nerves of the sympathetic nervous system (which activates the "fight or flight" response) are cut at the spine level. Sympathectomy, which is also called endoscopic thoracic sympathectomy, is often done to treat excessive sweating.

"The surgery was really to treat the symptoms, not the underlying disease," Rosenberg said.

After the surgery, the woman's hand became warm and moist — a sign of increased blood flow in the arteries in her hands. "It's like making a highway from a two-lane to a four-lane," Rosenberg said.

The patient's fingers started to heal, and the dead, black tissue fell off, leaving scars. "We were surprised at how well it healed and how much of the fingertips remained," Rosenberg said.