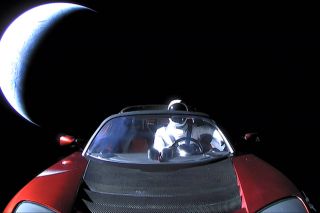 Starman and his cherry-red Tesla roadster zoom away from Earth in this final photo from the car after its launch on Feb. 6, 2018. A year later, Starman has put more than 470 million miles (760 kilometers) on the odometer and now has Mars in his rearview mirror.
(Image: © SpaceX)

One year ago today (Feb. 6), a spacesuit-clad mannequin named Starman blasted into orbit aboard a cherry-red Tesla roadster he borrowed from his buddy, Tesla and SpaceX founder Elon Musk.

The mannequin and his ride were the first payload aboard the maiden voyage of SpaceX's gargantuan Falcon Heavy rocket. In the past 12 months, car and driver have traveled more than 470 million miles (760 million kilometers) around the sun. They are currently drifting beyond Mars in an elliptical orbit that will last about 557 Earth days, according to the tracking site whereisroadster.com. [7 Everyday Things That Happen Strangely in Space]

Needless to say, the warranty on Starman's Tesla has long since expired … about 10,000 times over.

According to whereisroadster.com, Starman's roadster has exceed its 36,000-mile (58,000 km) warranty about 13,000 times in the past year. Those numbers might be a little outdated, though; according to Tesla's website, the current warranty for a used roadster is four years or 50,000 miles (80,000 km). So, assuming Starman was able to snag that sweet 2019 rate, he'd have exceeded his warranty about 9,500 times in his travels around the sun so far.

Starman could definitely use that policy, too. As he travels the cosmos in his exposed red convertible, Starman faces an endless barrage of micrometeorites, solar radiation and cosmic rays that will gradually rip his ride (and his spacesuit) to bits. While tiny space rocks dent and ding the car from all sides, the harsh energy of stellar radiation will slash through the carbon-carbon bonds that make up most of the car's plastic, leather and fabric components, chemist William Carroll told Live Science last year.

Organic materials making up the car's leather seats, rubber tires and paints may already be gone. "Those organics, in that environment, I wouldn't give them a year," Carroll said.

A million years from now, the car may be reduced to its naked aluminum frame, but chances are it will still be orbiting the sun. SpaceX initially predicted that Starman and his roadster could cruise the solar system for about 1 billion years.

A study published in 2018 to the preprint journal arXiv.org predicted a slightly shorter life span for the mannequin cosmonaut. According to the study's authors, the car will probably crash into Earth or Venus sometime within the next few tens of millions of years. However, there's just a 6 percent chance that the car will collide with Earth in the next 1 million years and only a 2.5 percent chance it will hit Venus in that same time span.

For now, Starman and his roadster are about 163 million miles (262 million km) beyond Mars and gaining a few thousand miles an hour. It's a long way to go in a year, and the journey has barely begun. We hope Starman has insurance.