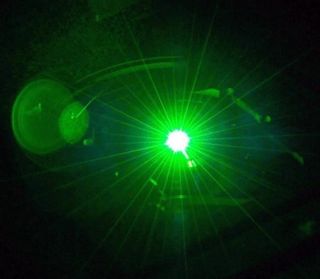 In a new study scientists found a way to make laser light incredibly "pure" by ensuring that it remains steadily at almost the same wavelength. (Note: the image is not the laser in question).
(Image: © ORNL)

A team of scientists at the Massachusetts Institute of Technology (MIT) has made the purest laser in the world.

The device, built to be portable enough for use in space, produces a beam of laser light that changes less over time than any other laser ever created. Under normal circumstances, temperature changes and other environmental factors cause laser beams to wiggle between wavelengths. Researchers call that wiggle "linewidth" and measure it in hertz, or cycles per second. Other high-end lasers typically achieve linewidths between 1,000 and 10,000 hertz. This laser has a linewidth of just 20 hertz.

To achieve that extreme purity, the researchers used 6.6 feet (2 meters) of optical fibers that were already known to produce laser light with very low linewidth. And then they improved the linewidth even more by having the laser constantly check its current wavelength against its past wavelength and correct any errors that cropped up. [6 Cool Underground Science Labs]

This is a big deal, the researchers said, because high linewidth is one of the sources of error in precision devices that rely on beams of laser light. An atomic clock or a gravitational-wave detector with a high-linewidth laser can't produce as good a signal as a low-linewidth version, muddling the data the device produces.

In a paper published today (Jan. 31) in the journal Optica, the researchers wrote that their laser device is already "compact" and "portable." But they're trying to miniaturize it further, they said in a statement.

One possible use they imagine? Gravitational-wave detectors based in space.

Gravitational-wave detectors sense the impact of massive, faraway events on space-time. When two black holes collide, for example, the resulting shock wave causes space to ripple like a pool of water struck with a stone. The Laser Interferometer Gravitational-Wave Observatory (LIGO) first detected these ripples in 2015 in a Nobel Prize-winning experiment that relied on carefully monitoring laser beams. When those beams changed shape, it was evidence that spacetime itself had been perturbed.

Researchers plan to build bigger, more-precise gravitational-wave detectors in orbit. And these MIT scientists think their lasers would be perfect for the task.