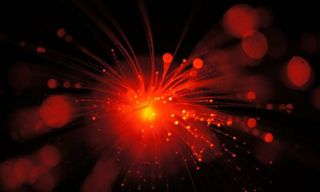 Imagine sitting down to dinner with a group of friends, when a laser tickles the water molecules inside your ear.

"You need to get home right away," your older child shouts. The younger one has fallen and cut their knee, and might need stitches.

You stand up, excuse yourself, and make for the exit. Your friends have no idea why, but assume you heard a message inaudible to the rest of them in the noisy room, transmitted into your ear by laser light.

That's the future scientists at MIT imagined when they developed a laser system for sending sound across a room using laser light.

Their method isn't the first to transmit sound waves using lasers. But it is the loudest. Their machine, described in a paper published on Jan. 25 in the journal Optics Letters, relies on wiggling a laser back and forth across the water molecules in the air by someone's ear. That wiggling motion (accomplished with a fast-twitching mirror) jolts the molecules into motion, causing them to bang against the surrounding air molecules and produce sound waves. [What's That Noise? 11 Strange and Mysterious Sounds on Earth & Beyond]

Not that much water is needed.

"This can work even in relatively dry conditions because there is almost always a little water in the air, especially around people," research team leader Charles Wynn said in a statement. "We found that we don't need a lot of water if we use a laser wavelength that is very strongly absorbed by water. This was key because the stronger absorption leads to more sound."

Other methods now under development, they noted, produce clearer sounds. But those methods (like switching a laser on and off really fast to jiggle the water molecules) don't make sounds as loud as the wiggling method. (The researchers call it "sweeping" rather than wiggling.)

The point of all this is to send messages to individuals in a crowd without blasting them over loudspeakers.

"The ability to send highly targeted audio signals over the air could be used to communicate across noisy rooms or warn individuals of a dangerous situation such as an active shooter," the statement said.

In the paper, the researchers said that some laser-sound techniques are under development by the military.

One remarkable point is that the underlying concept here isn't very new. The paper notes that Alexander Graham Bell, who invented the first practical telephone, patented a device back in 1880 along with a partner named Charles Sumner Tainter that transmitted sounds via light.

Bell and Tainter's "photophone-transmitter" was a proposed "instrument for controlling a radiant beam and imparting to it a varying character, whereby in falling on an appropriate receiving-instrument the said beam may be made to produce sound."

In other words: Wiggle light over some material, and sound should emerge.

The key differences, of course, in the modern MIT system are that the receiver material is just ambient water vapor, and that the light is a precision laser. But the underlying concept is the same.

The next step for the MIT device, the researchers wrote, is to try it outdoors and at longer range.

Live Science contacted the authors to request more detail on what it's actually like to hear the laser-transmitted sounds, and will update this article if they respond.