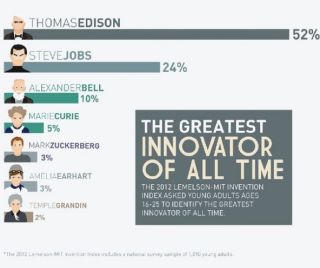 The results of a survey asking young Americans about who they considered the greatest innovators of all time.
(Image: © MIT)

Even the Apple generation doesn't favor Steve Jobs over the most iconic inventor in U.S. history. Young Americans overwhelmingly chose Thomas Edison as the "greatest innovator of all time" in a new MIT survey.

That doesn't mean Jobs lacks for fans in the wake of his death last year. The man who relentlessly drove Apple to create the iPhone and iPad received 24 percent of the vote among some 1,010 Americans ages 16 to 25 who participated in the survey. But a whopping 54 percent voted for Thomas Edison, who was credited with the first practical light bulb, the phonograph for recording sound, the movie camera and other marvels of the modern age.

Alexander Graham Bell, inventor of the first practical telephone, came in third with 10 percent. He was followed by scientist Marie Curie, famed for her pioneering work on radioactivity, and Mark Zuckerberg, the young founder and CEO of Facebook.

The annual Lemelson-MIT Invention Index also gauged young Americans' perceptions of invention and innovation today. Only about 40 percent of the respondents said they couldn't imagine life without technology such as smarpthones and tablets, and less than half (47 percent) said a lack of invention would hurt the U.S. economy.

The survey revealed possible trouble for the next generation of innovators. Sixty percent of the respondents said there were factors that could prevent them from making a career in science, technology, engineering or math.

Among that group, 45 percent said invention didn't receive enough attention in school, and 28 percent said their education left them unprepared to enter science and engineering fields.

"Hands-on invention activities are critical, but few too many students have opportunities to learn and develop their inventive skills," said Leigh Estabrooks, the Lemelson-MIT Program’s invention education officer. “This year’s survey revealed that less than half of respondents have done things like used a drill or hand-held power tool, or made something out of raw materials in the past year."

Tellingly, young Americans pointed to the need for new, inventive solutions in education — even more so than in health care, energy and finance. They also suggested possible solutions such as invention projects, field trips, or simply an inventor's work space.