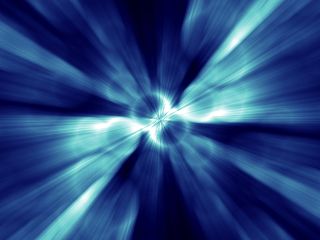 Mirror, mirror on the wall, how do light and matter mingle after all?

Scientists have known for a while that light has momentum and exerts force on whatever it hits. But because this momentum is so small, experiments haven't been able to observe exactly how it affects matter.

In search of answers, an international group of researchers turned to mirrors in a new study. "The mirror always tells the truth," Tomaž Požar, the lead author of the study and assistant professor in the department of mechanical engineering at the University of Ljubljana in Slovenia wrote in the playful analogy referencing "Snow White and the Seven Dwarfs" that he created and sent to Live Science. [What's That? Your Physics Questions Answered]

Though Požar and his team didn't have a conversation with the mirror, they did listen intently to how it reacted when it was hit with a beam of light. They attached acoustic sensors, which work similarly to a medical ultrasound, to a mirror fitted with a heat shield. (Heating can create elastic waves that would hamper the signal they were trying to study: the elastic waves created by momentum.)

Then, the researchers shot laser beams into the mirror and used the acoustic sensors to listen to the waves created as light hit the surface. "It's like a hammer smash made by light," Požar told Live Science.

These tiny waves caused "sounds," or tiny movements among the atoms of the mirror. The smallest displacement they found was about 40 femtometers, which is about four times the size of the core of an atom, Požar said.

Before this experiment, scientists could only measure how light would transfer momentum to an object as a whole, Požar said. But this new method allowed them to see how this force is distributed throughout the material. And though previous research predicted that light moves matter by depositing momentum into different elastic waves, now there is experimental evidence that it does, Požar said.

Currently, scientists have a handful of ideas about how momentum is transferred from light to a material, Požar said.

Scottish physicist James Clerk Maxwell was the first to propose, in 1873, that light carries momentum in its electromagnetic fields. His equations along with a few others form the basis of electromagnetism. "Everybody agrees with Maxwell's equations of electromagnetism" and the laws that say momentum and energy are conserved, Požar said. But different scientists have their own views on how the force of light is distributed throughout matter.

One famous example is the so-called Abraham-Minkowski controversy, an argument between German physicist Max Abraham and German mathematician Hermann Minkowski. Abraham suggested that the momentum of a photon should be inversely related to the "refractive index," a number that describes how light travels through a material, whereas Minkowski suggested it should be directly related.

Though the new study hasn't yet determined which, if any, hypothesis was correct, the researchers hope to fine-tune and use this experimental procedure in liquid and other materials to eventually figure it out.

Požar continues in his analogy: is it Snow White or the evil Queen? "Is it the formulism proposed by Abraham? Perhaps the one suggested by Minkowski? Or is it the one of Einstein…Or of a yet anonymous scientist whose name will [one] day appear in all textbooks?"

As far back as 1619, German astronomer and mathematician Johannes Kepler suggested that a comet's tail seemed to always point away from the sun because the sun's light was exerting pressure on it.

Understanding the physics behind light momentum would most likely have thrilled Kepler, but it would also have some practical applications. For example, optical tweezers could be optimized to exert the least force on the tiny, organic objects they handle. Or grand solar sails could be created to sail through the galaxy on the sun's energy.

The researchers reported their findings Aug. 21 in the journal Nature Communications.