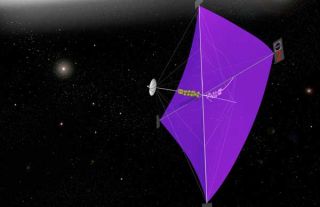 While rocket fuel has provided the energy for most space travel so far, solar energy may provide the boost for spaceships in the future. Just like cloth sails harness the wind, giant reflective sheets called solar sails can harness the sun's energy . These sheets could save fuel and provide maneuverability, but cannot function deep in space.

As billions of light particles hit the sheet, they push the sail strongly enough to move a spacecraft. Over time, the solar particles could keep pushing a spaceship faster and faster, allowing it to attain very high speeds, according to scientists at Argonne National Laboratory.

The sails can be as large as football fields, but are 40 to 100 times thinner than a sheet of paper, according to NASA's Marshal Space Flight Center. Inflatable booms provide the sheets with rigidity, and tether the solar sail to the spacecraft.

Unlike rocket propulsion, which relies on a finite quantity of fuel, solar sails harness the virtually infinite propulsive power of the sun's light, according to NASA. This limitless energy source could allow spaceships equipped with solar sails to hover and maneuver in fashions too costly for ships reliant on fuel-based propulsion systems.

However, solar sails do have their limitations. In our solar system, at distances beyond the orbit of Mars, the sun becomes too faint to push a solar sail, which limits their use deep in space, according to NASA.

The solar panels on some satellites have been used as rudimentary solar sails, but no country has yet launched a spacecraft that relies primarily solar sails for propulsion. That will change this year, when both the Japanese Aerospace Exploration Agency (JAXA) and the American Planetary Society launch solar sail probes.

The Japanese probe, called IKAROS, will travel to Venus with scientific equipment, according to JAXA. And LightSail-1 will circle the Earth, testing solar sail technology, according to the American Planetary Society.

The concept of a solar sail dates back almost 400 years. Johannes Kepler, the astronomer best known for calculating the elliptical orbits of the planets, observed solar radiation creating a comet's tail. Even then, he grasped that a sail could harvest that force just as terrestrial sails trap wind power to propel ships, according to NASA.