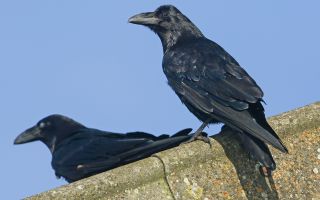 "Hey, don't blame us, we were just thirsty," is what the ravens would probably say, if they could talk with physicists.
(Image: © Shutterstock)

Bizarre data glitches have set gravitational-wave scientists — and a conspiracy of ravens — all aflutter.

A series of weird blips in the data, known as short-duration bursts, raised the suspicions of physicists at the Laser Interferometer Gravitational-Wave Observatory (LIGO) Hanford Observatory, in eastern Washington. Were they communications from alien beings? The work of nefarious data scramblers? Or previously unknown physics?

It turns out it was none of the above. [The 5 Smartest Non-Primates on the Planet]

Rather, the blips came from a conspiracy of thirsty ravens that were pecking at ice on pipes leading into the facility, the researchers announced on April 16 at an American Physical Society meeting in Columbus, Ohio, according to their abstract.

The discovery came about after the physicists decided to increase the sensitivity of the advanced LIGO at the Hanford Observatory, one of two facilities in the United States (the other is in Livingston, Louisiana) that detects gravitational waves.

Gravitational waves have been in the news in recent years. Albert Einstein predicted that these ripples in space-time would form when massive objects in the universe collided. Thanks to data collected by the observatories in Washington and Louisiana, physicists directly detected gravitational waves for the first time in September 2015, and three of them won the Nobel Prize in physics for this discovery in 2017.

A team of physicists came across the recent glitches while trying to fine-tune the LIGO Hanford Observatory. These odd glitches didn't look anything like gravitational waves, they said. Luckily, the observatory has microphone sensors placed around it to pick up environmental disturbances. After listening to one recording from July 2017, the team identified what sounded like the pecking of birds, Science News reported.

Curious, the group trooped outside to inspect one of the observatory's 2.4-mile-long (4 kilometers) arms. The evidence was plain as day: bird peck marks covered a frosty pipe that was connected to the cooling system, the researchers said.

They even caught one raven in the act that was pecking at the ice — likely to slurp up the bird equivalent of a slushy, Beverly Berger, a physicist and ombudsperson of the LIGO Scientific Collaboration, said at the conference, according to Science News.

Other LIGO glitches were caused by airplanes flying overhead and an incorrect equipment setting, the researchers said. But the physicists won't be seeing raven-related anomalies anytime soon, as they altered the pipe so that it no longer accumulates ice on it, Science News reported.

The raven flock will have to look for a drink elsewhere. And they should thank their lucky stars they didn't end up like the hapless weasel (Martes foina) that electrocuted itself at the Large Hadron Collider and shut off part of the facility's power in 2016.