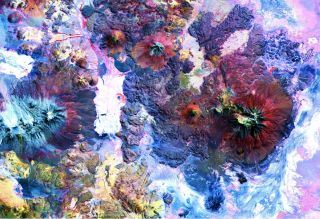 Our planet's continents may have formed beneath large mountain ranges like the Andes along the Chile-Bolivia border, shown here in a Terra satellite image.
(Image: © NASA/GSFC/METI/ERSDAC/JAROS, and U.S./Japan ASTER Science Team)

Earth's continents may have been born under large mountain ranges like the Andes.

New research combining a mysterious missing trace element, a 66-million-year-old rock burped up by an ancient volcano, and a database of all the rock chemistry analyzed by scientists in the past century explains why Earth has continents. Published Jan. 16 in the journal Nature Communications, the study suggests that where mountains are born, so are continents.

"It's like a jigsaw puzzle," said study leader Ming Tang, a postdoctoral researcher in geology at Rice University in Houston. "There is a missing part in this continental jigsaw puzzle, and it seems that we found the answer." [Photo Timeline: How the Earth Formed]

The missing piece is a rare-earth metal called niobium. In Earth's middle layer, called the mantle, as well as in the oceanic crust (the part of the planet’s outer layer covered by seas), niobium and another rare-earth element, tantalum, typically co-occur in a consistent ratio. The continental crust is weird, Tang told Live Science. The crust that makes up the continents is relatively low in niobium.

The case of that missing niobium in the continental crust has pestered geoscientists for decades. Tang went hunting for it in a rock geochemistry database maintained by the Max Planck Institute in Germany. He searched subduction zones, where the crust grinds into the mantle and magmas form. That magma, when cooled, has the potential to create continents. Niobium wasn't missing across many of these subduction zones, Tang found. But it was bizarrely absent in particular mountain-building regions like the Andes.

The Andes are a massive mountain-building region, powered by the nearby tectonics of a subduction zone. As the oceanic crust off the coast of South America crunches below the continental crust, the restless Andes rise, and magma spews from some of the highest-elevation volcanoes on Earth, Tang said.

Regions like the Andes — which form atop a subduction zone — are known as continental arcs, and they're special because the crust there is about twice as thick as regular continental crust, Tang said. Unfortunately, the chemistry of the rocks at the bottom of this crust are a mystery. At nearly 50 miles (80 kilometers) below the surface, these rocks are inaccessible.

Fortunately, the Sierra Nevada mountains of the western United States used to be an active mountain-building region, like the Andes today. Tang, along with Rice University petrologist Cin-Ty Lee, and their colleagues analyzed a sample of rock that formed some 66 million years ago and was pushed to the surface in a volcanic eruption about 25 million years ago. This rock, called a xenolith, originally formed deep at the base of the Sierra Nevada when they were an active continental arc — the researchers found the rock in Arizona.

The rock "might provide a very nice, excellent analog to the deep crust beneath the Andes," Tang said.

Niobium gets trapped so deep because of the unique conditions beneath these super-thick sections of Earth's crust. Under continental arcs, because of the thick crust, the mantle is under high pressure, Tang said. Under high pressure, a titanium mineral called rutile crystallizes out of magma. Rutile happens to trap large amounts of niobium, and not much tantalum. It's also very dense, so it falls deep within the crust as other rocks get circulated toward the surface.

Because the continental crust is missing niobium, it must have formed under these continental- arc conditions, Tang said. And that means that places like the Andes probably held the seed of all the continents on Earth today.

"Every piece of continent that we are standing on right now probably started out with these mountain-building processes," Tang said.