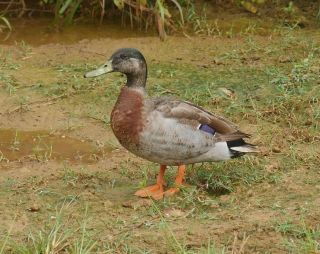 Trevor, the only duck on the Pacific island of Niue, stands near his cozy puddle home. Trevor was reportedly named after New Zealand parliamentary speaker Trevor Mallard.
(Image: © @thepuddleniueisland/Facebook)

Live Science is sad to report that Trevor the mallard, billed by some as the "world's loneliest duck," has died as he lived — alone in a puddle.

Known as the only duck on the small west Pacific island of Niue (population around 1,600), Trevor was found dead in the roadside puddle he called home on Friday (Jan. 25) after being attacked by a dog, according to sources close to the duck.

Trevor rose to modest internet fame in 2018 after an editor from The New Zealand Herald crossed paths with the bird during a visit to the rocky Niue island, which is located about 1,500 miles (2,400 kilometers) northeast of New Zealand. Trevor is said to have arrived there mysteriously one day after a storm separated him from his flock, making him the island's sole duck. It isn't known if he "flew" over from New Zealand or another island.

With Niue's jagged limestone cliffs providing few duck-worthy dwellings, Trevor took up residence in a small roadside puddle, where he became as much a landmark as an ersatz island mascot.

"Someone giving directions told me to 'turn right after the duck,'" Claire Trevett, an editor at The New Zealand Herald, wrote in September 2018.

According to Trevett, locals took turns bringing food to Trevor while the island fire department occasionally refilled his puddle with fresh water. In adorable Disney fashion, Trevor the Lonely Duck even struck up relationships with several other local birds.

"He captured many hearts and even the rooster, the chicken and the weka were looking a little forlorn today wandering around the near-dry puddle," Rae Findlay, chief executive of the Niue Chamber of Commerce and the manager of Trevor's Facebook fan page, told Australian news site ABC.net.

RIP, Trevor. May you meet many a celebrity quacker in duck heaven and be lonely no more.